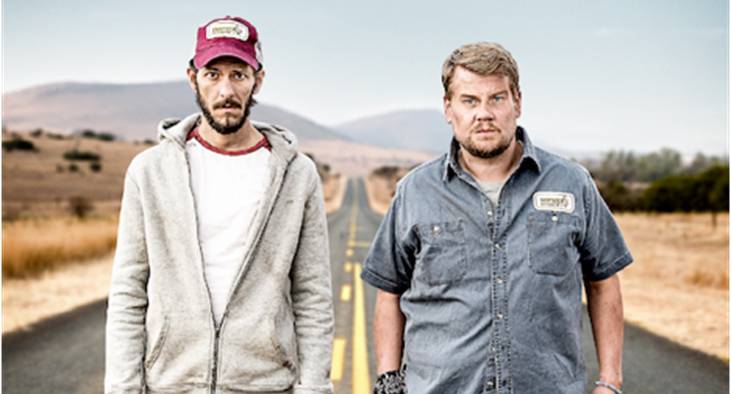 With the show's second season debut set for Dec. 24, co-creator Mathew Baynton talks about what the streaming service brought to the table.

It’s a car crash that best exemplifies the role streaming service Hulu plays as co-production partner with the BBC on the comedy-thriller The Wrong Mans.

Mathew Baynton, who co-writes and co-stars in the series with James Corden, means that in a good way.

“It’s the difference between seeing a car spin through the air and smashing in front of you on screen, and seeing a car screaming out of shot and the sound of it crashing, and then a hubcap rolling past,” says Baynton (pictured, left), who had previously appeared with Corden in the BBC series Gavin & Stacey.

“We need to see those big action moments on screen to feel that there’s any jeopardy for the characters, and that’s what makes it all the funnier.”

James Corden, who co-stars in The Wrong Mans, will take over as host of CBS’ The Late, Late Show in March.

Baynton and Corden had already finished the pilot for The Wrong Mans in 2012 when they decided they couldn’t properly tell their tale of 2 ordinary blokes caught up in a web of conspiracy, crime and corruption on a BBC sitcom budget, which tops out at £300,000 per half hour. So when Baynton flew from England to New York City, where Corden was appearing on Broadway in One Man, Two Guvnors, to write the remaining 5 episodes of the first season (or series, as the Brits say), they set up meetings with U.S. TV outlets.

Hulu was the duo’s first stop. Baynton says he’d never heard of the company before, but he was immediately sold on the pitch by its then-head of originals Charlotte Koh, who impressed them with her enthusiasm, as well as her pledge not to meddle creatively.

“She also argued very well how much faith they would put in us and how little editorial interference we could expect,” Baynton says. “It was clear that we wouldn’t get into a situation where we’d have double the number of executives or channel heads who want to influence the content of what you’re making. Ultimately, with The Wrong Mans, we were trusted entirely by the BBC and Hulu. And I’ve worked on other shows where that’s very much not the case, and there’s a constant editorial conversation about every moment of both production and post-production.”

The second season of The Wrong Mans, which debuts on the BBC Dec. 23 and on Hulu Dec. 24, has Sam (Baynton) and Phil (Corden) emerge from witness protection and travel across deserts, through tunnels, inside prisons and on planes and trains, dodging knives and bullets along the way in a desperate effort to get back to their homes in Bracknell in time for Christmas.

“It started to look like it might air towards the end of the year if we stuck to the kind of schedule that we had,” Baynton says. “So we went back to the BBC and Hulu and said, ‘Look, if it could air as a Christmas thing, given that it’s kind of a homecoming story already, we think that would give it a real kind of magic.’ And, fortunately for us, they were all very happy with that idea.”

Baynton’s Wrong Mans partner will be leaving home indefinitely in real life to take over as host of CBS’ The Late, Late Show, which will tape in Los Angeles, in March 2015.

“It sort of encapsulates everything he loves all in one show, and I think he’ll have a great time doing it,” Baynton says. And he pledges not to tease Corden too much about getting a big head or going American on him, “because then he might not have me on his show,” he laughs.