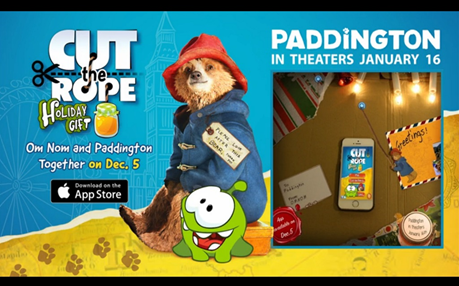 Branded content campaign is a partnership between FullBottle, The Weinstein Co and the Cut the Rope gaming app.

The characters from Cut the Rope puzzle video game and Weinstein Company film will see their worlds merge in an ad campaign that’s rolling out ahead of the U.S. release of Paddington. As part of the digital promo, influencer-produced videos will appear on Vine and Instagram to drive downloads of the mobile app and support the release of the film.

The deal with the viners was arranged by FullBottle, a San Francisco-based media company that pairs brands with online creators. The viners participating in the project are Brittlestar, Daniel Ojanlatva and Andrew David who are creating one video each.

“Some are artistic, others are comedic sketches,” says Eric Wachs, VP of marketing at FullBottle.

Some videos, like this one from animator Ojanlatva, show Paddington the bear joining Om Nom in the holiday version of the Cut the Rope app, launching Dec. 5. Others will play on the themes of the film, like a father showing the mischief his song gets him into when he’s hanging out with Paddington, Wachs explains.

The overarching theme of friendship helped FullBottle with its search for the right influencer partners, whom the team find by using an algorithm that sifts through tags, keywords and audience comments to find the right partners for brands.

“The influencers will be promoting not just the app to drive downloads, but also they’ll be creating short micro-videos to promote the film itself. It’s a duel-pronged approach,” says Wachs.

This is the first time a sponsored character makes an appearance in ZeptoLab’s Cut the Rope game. The film, which has already debuted in the U.K., comes out in January in the U.S.