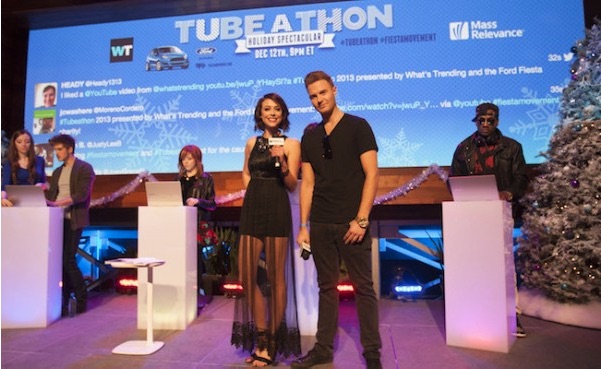 This year, the annual charity drive sponsored by Ford will also air as a 1-hour edited special on AXS TV.

What’s Trending’s Tubeathon, a charity drive that raises money for the Covenant House, is making its debut on TV this year.

Streamed live from Hollywood on Dec. 11 from 7 to 9 p.m., the third-annual event will also be televised as a 1-hour edited special on AXS TV later in the month.

This is the second year What’s Trending is working with Ford Motor Company as a sponsor. For every #Tubeathon or #GoFurther hashtag that viewers share throughout the evening stream, Ford and What’s Trending will donate $1 to Covenant House, a non-profit shelter org that helps out homeless youth.

The holiday-themed Tubeathon, a variety show, will this year feature YouTube personalities Trevor Moran, Sam Tsui, Jasmine V. and Timothy DeLaGhetto, among others. This year What’s Trending also partnered with Comedy Gives Back to feature stand-up acts, as well as crowdfunding platform Tiltify, which will be raising more money through online donations during the broadcast and running a simultaneous stream for gamers via Twitch.

Leading up to the event, What’s Trending will be releasing a daily series of video collabs called the 12 Days of Tubeathon. Here’s the first one from Jonathan Mann: