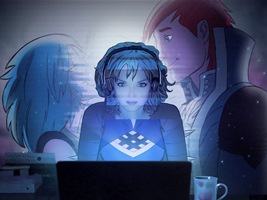 Going beyond the App Store with Avatar Secrets

Writer/director Ramona Pringle explains how she got her "appumentary" in front of big-city commuters and beyond.

With discoverability being one of the biggest challenges facing indie web series and transmedia projects, director/writer/producer Ramona Pringle knew it would take a creative approach to get the word out about her digital app-based documentary Avatar Secrets.

Avatar Secrets is an interactive “appumentary” designed for the iPad which explores, from a first-person perspective, issues around online gaming and the immersive communities associated with it. Officially launched with an event at Ryerson University on Nov. 19, the doc bowed on TVO’s Future Now platform and in the App Store on iTunes in Canada in October and was downloaded about 2,000 times in its first week.

“We are looking for those same kind of partnerships (globally). You really need it. That is one of the big things we’ve learned launching a digital project.”

Pringle started marketing Avatar Secrets during its production, launching a trailer during the Social Media Week conference last year and promoting it at the TFI Interactive Day conference held during the Tribeca Film Festival. She also brought Avatar Secrets to the Power of the Pixel conference in London, which she attended as part of a delegation led by the Canada Media Fund and the Bell Fund.

TVO, which licensed the doc for web, also promoted Avatar Secrets via its broadcast assets but Pringle wanted to take it one step further.

“One article here or there isn’t going to return much. We needed partnerships,” she explained.

That came in the form of a partnership with Metro newspapers, arranged through the paper’s then-editor-in-chief, Charlotte Empey. The partnership (which was purely editorial and not a media buy) included a number of stories that ran nationally in Metro daily newspapers, digital content on Metro‘s websites and an app dedicated to the partnership. The Avatar Secrets material ran in Metro the day before the app went live and continued for 10 days. Pringle said the partnership was particularly attractive because it extended the audience beyond Ontario, as well as a demographic that reads commuter newspapers.

“It’s there, it’s on the ground, it’s in people’s hands,” Pringle said of Metro.

Toronto’s Ryerson University, where Pringle works as an assistant professor, also supported the Avatar Secrets marketing effort by sponsoring spots on 5 screens around Yonge-Dundas Square. The 30-second spots ran every 5 minutes over a 4-week period.

The Avatar Secrets app also received a leg-up from the iTunes App Store. It was featured on the store’s homepage in Canada as best new app the day after it went live, and was showcased in a banner ad in the Entertainment section for several weeks.

The Avatar Secrets app is only available in Canada right now, but plans are currently in the works to distribute the doc internationally. Pringle is hoping she can strike similar partners for marketing to promote the doc abroad.

“We are looking for those same kind of partnerships — you really need it. That is one of the big things we’ve learned launching a digital project,” Pringle said, adding that she would also like to see the Avatar Secrets incorporated into school curriculums.

Avatar Secrets was produced by Pringle in association with TVO and financed with the assistance of the Canada Media Fund (CMF) and the Bell Fund. Michaele Jordana served as creative director/producer on the project.