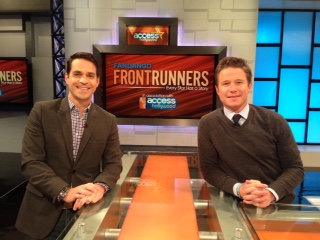 Celebrity interviews from the Fandango Frontrunners digital series will air as segments on the syndicated entertainment news TV show.

Online ticketing service Fandango is coming to television. Starting on Thursday, segments of its digital series Fandango Frontrunners will air as part of the syndicated entertainment news show Access Hollywood.

Frontrunners‘ third season premiered earlier this month on Fandango’s online and mobile network, which is visited by 30 million unique guests per month, and on the Movieclips YouTube channel, recently acquired from Zefr, which has 9 million subscribers and averages 230 million monthly views.

The plan is to a show a new Frontrunners segment each week on Access Hollywood during awards season.

Both Fandango and Access Hollywood are owned by NBCUniversal.