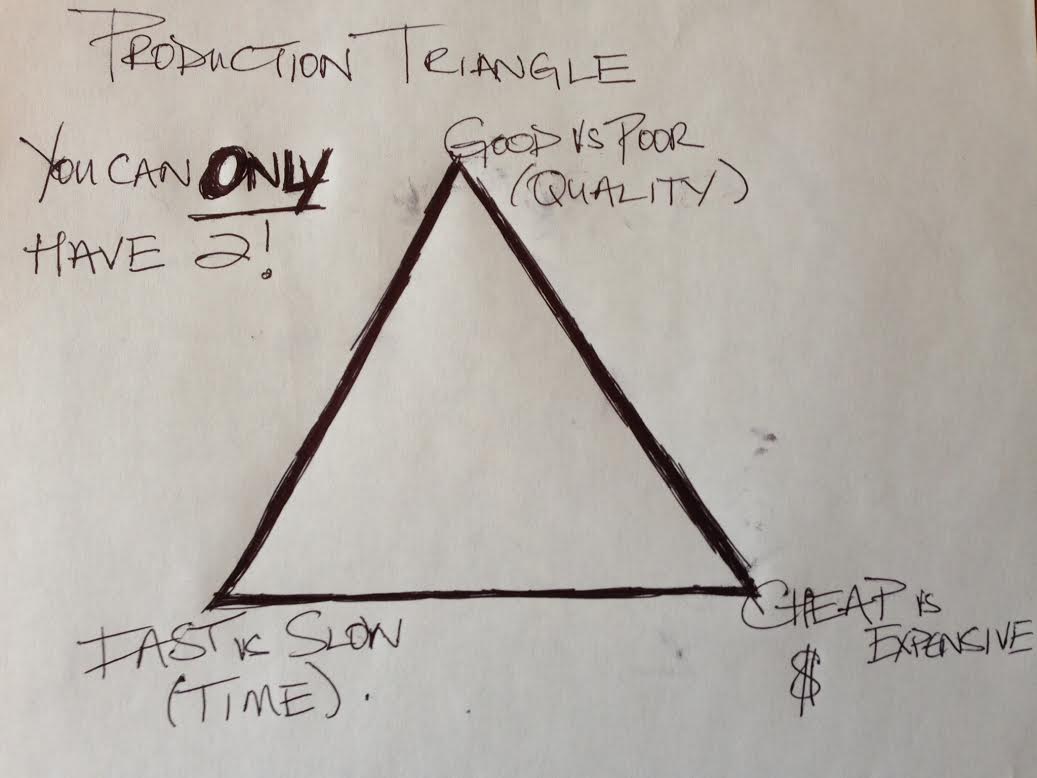 Blog: Production triangle and the sum of all parts

Siobhan McCarthy knows digital content buyers want content that's high in quality, cheap and delivered quickly - but who can actually pull this off? 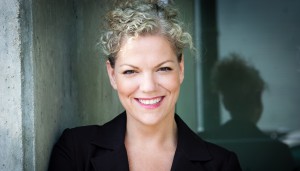 Guest post by Siobhan McCarthy, the CEO of blyssful PRODUCTIONS and red trike media and the producer of Parked.

I was first introduced to the “production triangle” by Bob Eberle, a theater instructor at the University of British Columbia. He was the first person to successfully articulate to me via the illustration above, the need as an artist to create with a producer’s sensibility.

Quality is integral to most projects. Nobody wants to compromise it, so let’s place it at the apex — you therefore need to sacrifice either expense or time. We learn early on in the entertainment business that “time is money.” So, how does one make quality sustainable digital content on a ground-down budget? How are content creators supposed to build audiences and market accordingly without traditional advertising budgets? I’m all about DYI and discoverability, but within reason.

Last week I attended Merging Media 5 (MM5), along with Canadian funding reps and executive decision-makers from MCNs, digital networks and distribution companies. I did not see any union representatives I recognized, which is problematic. Our unions are presently indoctrinated in the old-school thinking regarding content creation for traditional broadcast or theatrical release. There are few realistic systems in place, if any, that reflect this new model that has sustainability at its core.

As Canadians, we don’t tend to dream as big. We play smaller, and I wonder if our work being highly subsidized makes us more risk-averse.

Until very recently, web series have had a bad reputation, often due to poor quality. The production triangle as outlined above is not congruent with the expectation of web series north and south of the border. All of the stakeholders I spoke with at MM5 were very clear that they wanted high quality content, yet nobody wanted to pay full price for it. And they want it yesterday, with a built-in audience with more than 100,000 views per episode on as many platforms as possible.

Speaking with industry stakeholders Brian Seth Hurst, David Katz and Ted Hope, who reside south of the border, makes you realize just how fortunate we are in Canada. And to that end, I question if it makes us complacent. We don’t tend to dream as big. We play smaller, and I wonder if our work being highly subsidized makes us more risk-averse. We are so busy chasing funds to get our work made that the business of the distribution and monetization of our work gets overshadowed. Perhaps if the need to recoup our investment was linked to our personal credit cards instead of a fund, we would be better marketers and distributors of our properties? Americans have an incredible entrepreneurial mindset. Spend 5 minutes with Hope and you will be inspired into action immediately.

I was fortunate to speak with the following heads of funds and executive decision-makers in order to provide a snapshot of the opportunities available to Canadian content creators.

Prem Gill is the director of content at Telus, a telecom that’s offering production grants through an incubator called Storyhive. Right now, it’s in the voting process for the selection of its first cohort of web series. “The voting aspect is important to us,” says Gill. “We want the community to have a voice in the stories that are told through community access funding/public broadcasting.” 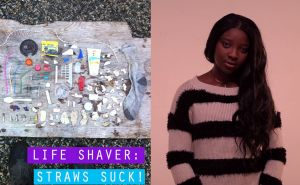 Those selected via the community vote, which began last week (pictured left: 2 projects being votes on right now) will receive a $10,000 grant, a mini boot-camp workshop and be paired with an educational partner. Telus will have non-exclusive rights of the content creator’s show for its on-demand Optik TV service, but copyright will remain with the content creator. Two winners will get $50,000 to make a series with 5 to 7 episodes, 3 to 8 minutes in length, Gill explains.

Worried about the reality of making a quality series on such a limited budget, I asked if other financing is OK. “Yes…but we want it to be as self-contained as possible, which is why we have such hard and fast deadlines. The teams get only 10-12 weeks to finish their project,” she says.

Storyhive wants all three corners of the production triangle. I’m curious if Storyhive will be providing in-kind support such as business affairs/legal; a DICE insurance package, an errors and omissions policy. These costs alone run close to $7,000. I’m also not sure how equipment, union wages, locations, costumes and catering, editing and marketing will factor into the remaining $3,000 of the $10K grant.

I wanted to ask executives who hold the purse-strings at various funding bodies for help in solving this funding dilemma or perhaps just some advice on accessing funds without always turning to crowd-funding.

Here’s a roundup of their best tips:

So there you have it: As a digital content creator, you need to have a clear vision of who your audience is and how to engage them accordingly. But where is the funding support to do that? Ask your funders pertinent questions to bring about change. For instance, if you are an official selection of a film festival, you are eligible to apply for “market supports.” If you are selected for a web series festival, you are not eligible. How are you supposed to engage your audience when you can’t even afford to attend the festivals that are screening your property? In Canada, why does a broadcaster (that delivers content digitally) trigger tax credits and a portal/platform (that also delivers content digitally) doesn’t? In this fast-paced environment of ground-down budgets, I encourage you to preserve the quality of your work and try not to get lost in the shuffle of mediocrity.

Slow and steady wins the race when it comes to building and maintaining your audience. Take the time to be methodical in the implementation of your distribution and marketing strategy. Study your analytics. Iterate. Be an active part of the space and community with which you are engaging. I wish you the best of luck with whichever path you choose.