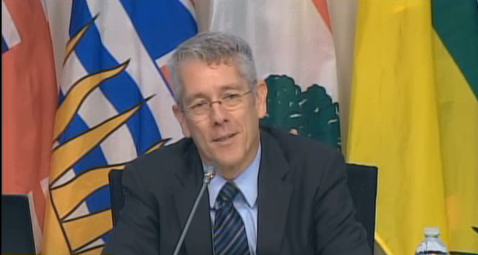 "Good decisions cannot be based on anecdotes about how your teenager is using his smartphone or gaming system," the chairman says.

CRTC chairman Jean-Pierre Blais on Thursday defended his decision to go head-to-head with Netflix and Google at the recent Let’s Talk TV hearings.

“Informed” regulatory policy cannot be fashioned out of unsubstantiated claims, blogs or tweets, he told the Vancouver Board of Trade in a lunch address.

“Good decisions cannot be based on anecdotes about how your teenager is using his smartphone or gaming system…Nor can we make informed decisions based on one-sided blog arguments or 140 characters in the Twitterverse,” he said.

His comments followed the CRTC chair resolving a challenge from a stone-walling Netflix and Google to its judicial enforcement powers by ignoring the companies’ submissions to recent landmark hearings into the future of Canadian TV.

Despite being compelled by Blais to turn over key corporate data, the U.S. digital giants refused to do so in the absence of guarantees of confidentiality.

Blais stood on principle during his first public comments following his tussle with Neflix and Google, insisting industry players had to bow to the regulator’s requirements for transparency and accountability.

“Such parties cannot refuse to provide evidence without consequences, especially when they appear before an evidence-based decision maker,” he argued.

Blais did not explain what those consequences might be. During the Let’s Talk TV hearings (pictured), he told Netflix director of global policy Corie Wright that withholding business data risked putting the U.S. streaming giant’s exemption to operate in Canada at risk.

“Like other administrative tribunals, we struck out their incomplete evidence,” Blais said to explain his final decision to ignore Netflix and Google’s participation in the Let’s Talk TV hearings.

“If we were to make decisions based on the latest fad or unveiled assumptions, we would find ourselves on a very short pier, rather than an intelligent bridge towards the ‘change’ destination on the other shore,” he said.