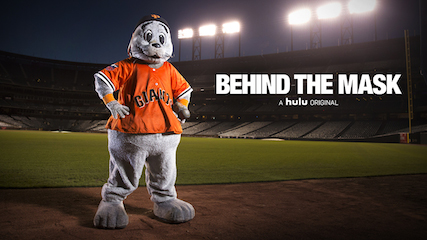 SF Giants mascot cast in new season of Behind the Mask

Hulu appears to have made a prescient choice with the cast for the second season of its Emmy-nominated original series about the lives of mascots, Behind the Mask, announced on Tuesday. Debuting in February, the 10 new episodes will feature Joel Zimei, the man who inhabits the “Lou Seal” costume for the San Francisco Giants, who won their third World Series championship in 5 years last week.

Season 2 of the show will also feature Chris Hall, a freelance mascot performer with autism whose gigs range from “The Easter Bunny” to “Bucky the Blood Drop”; 17-year-old Navy Baker, who plays the Gilbert Arizona High School mascot “The Tiger”; and, returning from season one, Chad Spencer, who plays “Tux” for the  minor league hockey’s Wilkes-Barre/Scranton Penguins.

Behind the Mask is created by Emmy Award-winning filmmaker Josh Greenbaum (The Short Game) and produced by Occupant Entertainment (Madame Bovary, The Wackness).

Earlier this year, season one of Behind the Mask earned Hulu its first-ever Emmy nomination, in the Outstanding New Approaches category.