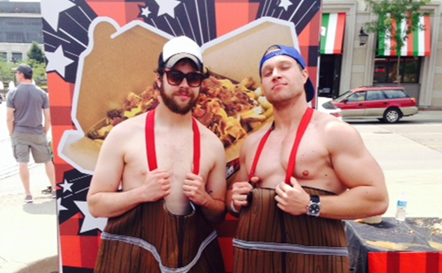 Who wants to watch competitive eaters go up against 6 pigs in Sault Ste. Marie, Ont.? Or a gravy-wrestling match in Moose Jaw, Sask.?

Smoke’s Poutinerie is hoping its target millennial consumers do. The Canadian quick-service-restaurant chain is launching a 7-part web series next week that follows 3 competitive eaters — “Furious Pete” Czerwinski, Pat “Deep Dish” Bertoletti and Tim “Gravy” Brown — as they chow down on fries, cheese curds, gravy (the three key ingredients in the Canadian fast food staple), doner and other greasy foods during a 17-stop tour across Canada this past summer. The show launches Wednesday, Nov. 12, along with the Smoke’s Poutinerie YouTube channel, now in beta. 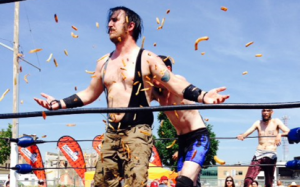 The series called Gravy Train Tour is produced by Studio M, the team behind the WestJet Christmas Miracle video that went viral last year. The rollout of the series (2 episodes per week for the next month) and social media strategy is being handled by Toronto-based Boat Rocker Studios, a division of Temple Street Productions.

Richard Glass, director of marketing at Smoke’s, which is headquartered in Ajax, Ont., says the web series and event are a good way for the company to help market the franchise nationally, without putting up the big bucks it would take to launch a traditional media campaign.

“I can’t deny that cost is not a factor. We’re trying to do stuff that’s right out of the box. We don’t even know if an ad agency has any more experience doing these kinds of things than we do,” he says, referring to the experiential and digital efforts.

“I think it’s also important that we have control of these things in its infancy, and have a closeness to it. So when we went on the tour…we felt what was going on, we knew when we were being successful and when we weren’t, and why. And that closeness is going to help us for next time,” he tells StreamDaily.

The poutine shop has expanded rapidly in recent years — 6 years ago, there was just 1 restaurant, and now there are 80. As a result, the company has had to boost marketing efforts to add value to the franchisees. Much of this investment has been into the internal marketing team: Glass says a year ago, there was just “one fellow doing marketing and a whole bunch of other things” at the same time. Now, there are 4 marketers in-house devoted to branding efforts.

Together with Boat Rocker, Smoke’s Poutinerie is trying to extend the appeal of the competitive eating tour (called Smoke’s Poutinerie World Famous Great Canadian Cross Country Plaid Gravy Train Fries Curd & Gravy Weird Wild and Wacky Poutine Eating Tour 2014) to the digital space. One of the main catalysts of this effort will be Furious Pete, who has more than 1.4 million subscribers on his YouTube channel.

Carlos Pacheco, director of strategic partnerships at Boat Rocker, says he will collaborate with Czerwinski to help drive viewership and subscribers to the Smoke’s YouTube channel. His goal is to attract more than 200,000 views to the series, but he sees it as just the start of the company’s online video presence.

“The production value for this is extremely high,” says Pacheco about the series. “But after that, we need to build a long-term strategy, and sustain that audience and grow it beyond a campaign mentality,” he adds.