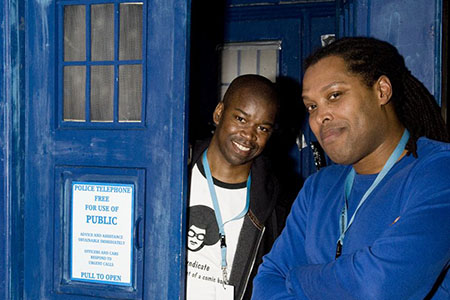 The U.K. pubcaster is readying a 3-part doc strand on science fiction that will be exclusive to its VOD service.

U.K. pubcaster the BBC is readying a 3-part doc series on science fiction that will be exclusive to its VOD service, the iPlayer.

The strand, entitled “My Life in Science Fiction,” will accompany the forthcoming 4-part BBC2 series Tomorrow’s Worlds: The Unearthly History of Science Fiction, in which historian Dominic Sandbrook investigates how science fiction informs dreams and nightmares. A premiere date has not yet been set.

The iPlayer series — which will be released on the same day as Tomorrow’s Worlds — will feature the films Invasion of the Fans, Days of Fear and Wonder, and Stories from the Stars.

In Invasion of the Fans, which is hosted by Barry Nugent (pictured above, left) and Dave Monteith (right) of ‘The Geek Syndicate’ podcast, British fans reveal how the genre has changed their lives, while Days of Fear and Wonder will again feature the pair, this time setting off on a road trip to understand the impact of the British Film Institute’s country-wide celebration of science fiction.

The commissioning editor for the iPlayer films is Tom Williams, while Andy Hall serves as producer, John Das and Ben Southwell are series producers, and Michael Poole is exec producing.