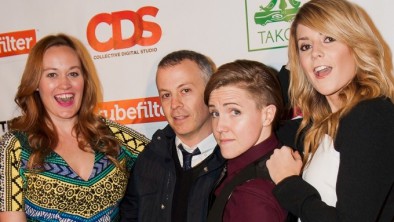 Goldfine joins Fullscreen from RockStream Studios, a digital media company he founded in 2012 to create and distribute direct-to-consumer productions, including the digital feature film Camp Takota. While there, he also produced digital projects with talents such as Tim McGraw and Mike Judge, and served as an executive producer on Kevin Hart’s theatrical film Let Me Explain.

Prior to RockStream, Goldfine (pictured with Camp Takota stars Mamrie Hart, Hannah Hart and Grace Helbig) served as president of AEG Digital Media, which did live webcasting and on-site mobile production for such events as the Grammys, the World Cup and the Academy Awards. Earlier, he served as head of development and production for AT&T Entertainment and did stints at Warner Bros. Television, Fox and Fremantle.

“There’s a huge opportunity ahead,” said Goldfine in a statement. “And with Fullscreen’s resources, talented team and vast network, it’s a perfect place to continue to change the way content is made and distributed. Plus, we’re going to have a hell of a lot of fun in the process.”