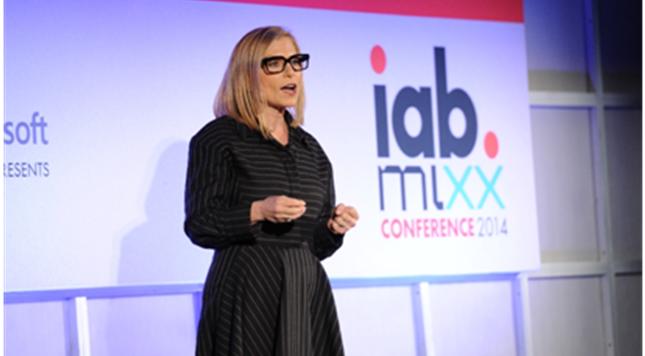 CNE’s Dawn Ostroff on the age of “the selfie brand”

At the Interactive Advertising Bureau MIXX conference on Monday, the former CW exec outlined her vision for millennial-friendly content.

In her previous role as a traditional television executive, Condé Nast Entertainment president Dawn Ostroff launched some big shows on the CW network, including Smallville, Vampire Diaries and Gossip Girl. But, as popular as they were with fans, their Nielsen ratings were rarely that impressive.

Ostroff thinks she knows the reason why.

“At CW, we single-handedly watched 18- to 34-year-olds migrate to other platforms whether legally or illegally,” she told the audience at the Interactive Advertising Bureau MIXX conference on Monday in midtown Manhattan.

Part of Ostroff’s reason for moving to Condé Nast was to find out where they were going and how to meet them there. Now she oversees The Scene where she is attempting to transform the company’s iconic magazine brands into new digital formats for a younger audience in the age of what she calls “the selfie brand.” So far, she appears to be successful — the portal’s 14 channels have already collectively generated 1.5 billion views.

“There’s a huge audience for incredibly rich, layered content,” she said, citing the Hunger Games and Twilight. This gives content creators the opportunity to create elaborate back stories with depth, like the immersive worlds of video games, she explained.

Millennials want individualized experiences that are easy to share, as sharing is the lynchpin of selfie branding, she explained. They also want real-world back stories and, most of all, access.

The future of the talk show format Ostroff envisions is one where the host talks directly at the camera, a model employed by her new Vogue Channel series 73 Questions. Each episode is filmed in a single shot of a celebrity subject who leads the viewer on a tour of her house while being peppered with questions. Ostroff screened the new episode, released Monday (below), in which Reese Witherspoon is looking straight at the camera as she moves through her California mansion and does flips on a backyard trampoline.

Ostroff’s speech was preceded by a conversation between Yahoo News anchor Katie Couric and Facebook COO Sheryl Sandberg, who discussed their respective experiences as women in tech and media. Couric talked about her move to Yahoo in June and Sandberg announced the relaunch of Facebook’s ad server, Atlas.

Completely rebuilt, Atlas uses Facebook’s massive reach and audience to connect online ads with offline sales, dumping cookies and measuring the true impact of an advertiser’s campaign, she explained. It will help marketers reach and target consumers across devices, being able to measure performance on a personal level.

In the breakaway sessions at IAB MIXX, there were a host of workshops aimed at keeping attendees up on new trends. At “Buzzfeed: The Science Behind Successful Sponsored Content,” Buzzfeed senior director of research Tami Dalley took participants through their process of working with partners. Without sacrificing “the art” of the viral post, they begin with data in an attempt to analyze the audience, and define the types of content they would most engage with.

“Tell me who your audience is and we can create content they will share,” she told the audience, but the focus on data early on must be balanced with the unquantifiable “creative genius,” often based on gut instincts on the part of Buzzfeed contributors, that has brought the site to the forefront of shareable content.

While a post’s virality is usually related to the content being topical, funny and hearfelt, Dalley said one of the most important things about reaching a millennial audience is nostalgia.

They “like to look back like they’re old people” and say, “‘remember when GameBoys were this big?'”