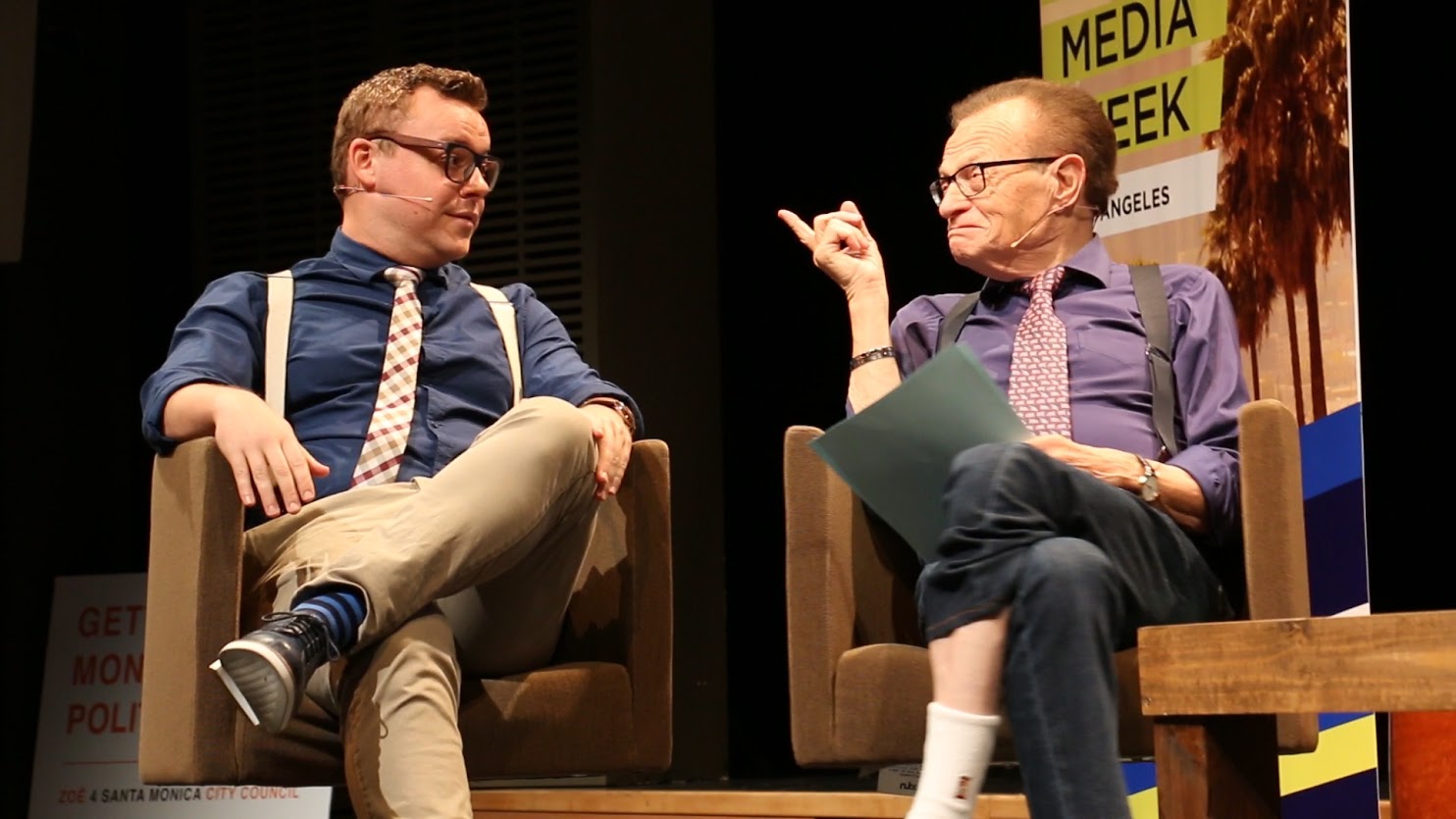 Even Larry King can get trending on Vine

Collab, an L.A.-based digital studio that helps Viners make money, showcases the power of their platform at Social Media Week.

It’s not easy to teach old broadcasters new tricks. But Collab managed to do that at its “Let’s Get Larry King Trending on Vine” panel on Thursday at the Social Media Week conference in Santa Monica, when it persuaded the 80-year-old interviewer/host to participate in a 6-second loop cuing the assembled crowd to break into the shmoney dance.

Typically, Collab is involved with talent that falls more into the Millennial demographic. The downtown L.A.-based digital studio represents over 150 of the most popular stars on Vine, who account for 20% of all Vine traffic, based on recent data. (Vine recently released it has 30 billion loop plays per month, and Collab’s creators account 6 billion of those.) The King experiment helped show the studio’s ability to attract audiences to creators’ videos, as well as the instant appeal of the micro-video platform.

More importantly for the Vine talent it represents, Collab is having success monetizing the platform, which has no built-in income-generating mechanism for its creators. It does it by securing them branded content deals for their Vines from companies such Ford, Ubisoft, Wendy’s, Sony and Fanta, as well as vigorously pursuing the Google AdSense revenue from YouTubers who appropriate their work.

Collab creative director of branded content Eamon Brennan says the appeal for brands is the ability to reach millennials who flock to the platform, as well as its ability to amplify their message.

“These folks have huge engaged reach,” Brennan says. “You want to reach 5 million people in 6 seconds. “Well, let me introduce you to KC James.”

A top Vine star with 4.2 million followers and 417 million loop views of his videos, James starred in a series of Vine loops to promote the launch of the Ford Mustang in Europe that ran in conjunction with the Champions League soccer final.

Brennan says that The Collab takes a traditional MCN split of 70/30, favoring the creators, with the AdSense and claim money. With the brand deals, it gets plus-10% on top of the fee earned by its creatorthe Viners.

Collab traces its roots back to GoPotato, an interactive and mobile video entertainment company launched by brothers Will, James and Tyler McFadden in 2006. It scored a small success with animated series Eli the Accountant’s Dirty Jokes, which debuted on YouTube and later aired 28 episodes on Cinemax. But, frustrated by their progress, they decided to put the creative aside, cease production, and start their own YouTube network, focusing primarily on the gaming vertical. Then one day James McFadden downloaded Vine on to his phone.

“I came to the office, started making Vines, and my brother was like, ‘What are you doing? Get back to work,’ recalls Collab chief creative officer Will McFadden (pictured, with King). “And I was like, ‘No, this thing is fun.’ And ever since then, we started setting out to get the top talent on Vine.”

They got into the platform on the ground floor, when someone with 50,000 followers was considered huge

“They were hungry for opportunities to figure out how to monetize their following,” says McFadden of the Viners. “Initially, the plan was to help them create their YouTube channel and to transfer that following from Vine to YouTube. But their following on Vine was building so fast, that we started getting opportunities from brands coming in. Then the other thing that we took notice of is people were gobbling up those Vines, putting them in compilations on YouTube, and those compilations were getting millions of views.”

“They think, I’m going to toss it up, run ads against it like it’s nothing and make money on it” adds Brennan, referring to the compilation-makers. “We have a whole team of people manually going out there and chasing down these Vines, watching every compilation. They know our talent back to front. They put claims on the content so we can put the money that they earn back into the creators pockets.”