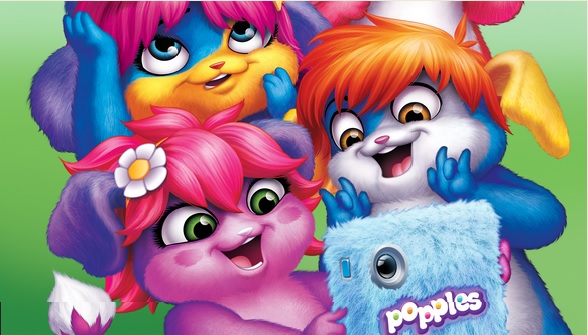 The streaming service teams up with toymaker Saban Brands as well as Rainbow Studios as it continues to make a heavy push into kids content.

On Thursday, Italy’s Rainbow Studios said it’s expanding its Winx Club franchise with a spin-off series called Winx Club WOW: World of Winx. Two seasons of the show (13 X 22 min.) have been ordered, the first of which will be available on Netflix internationally in early 2016.

Saban Brands also said on Wednesday that its new original kids series, Popples (pictured) will be available exclusively on Netflix.

The animated series (26 x 30 mins.) re-imagines the Popples characters that debuted in 1985 as a toy line, before becoming a popular Saturday morning cartoon that ran in the U.S. from 1986 to 1987. Once again, viewers will be able to visit the colorful world of Popplopolis, when the revamped series hits the Netflix library late next year. Saban Brands is producing the new Popples series with ZAG Entertainment.

Each episode will be driven by wacky Best Popple Pals (BPPs) Bubbles, Sunny, Lulu, Izzy and Yikes. Always wanting to help their friends, the BPPs’ optimistic intentions continually backfire, leading them to find new and crazy ways to unwind the mayhem they’ve caused.

Popples is the latest kids offering from Netflix, which just picked up fantasy-adventure series Wakfu from France’s Ankama Animation, as well as The Adventures of Figaro Pho from Australia/Canada-based Chocolate Liberation Front.

From Kidscreen with files from Melita Kuburas