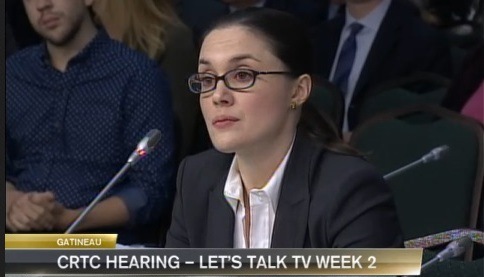 Netflix was clear Friday what the CRTC’s Let’s Talk TV hearings were not about.

“(That’s) a heck of an answer for someone who takes hundreds of millions of dollars out of the Canadian economy.”

Or much else without being compelled to do so with an order from CRTC chair Jean-Pierre Blais, discovered Corie Wright (pictured), director of global public policy for the U.S. video streaming giant, during her appearance at the hearings.

Blais early on let Wright know it was “actually quite offensive” to not trust the CRTC with confidential information.

That tense exchange changed after a break where Wright let the CRTC know it had talked to counsel and now felt comfortable with providing business data to the regulator, providing it could guarantee its confidentiality.

That wasn’t enough for Blais, who promptly let Wright know withholding requested business data to the CRTC on a confidential basis put its exemption order to operate in Canada at risk.

Blais then ordered Netflix to supply requested business information to the CRTC by Monday at 5 p.m.

Wright then asked if the regulator could “guarantee the confidentiality of the information requested.

“You are not entitled to a special treatment. The order stands,” Blais responded coldly.

That didn’t have Wright backing down when CRTC vice chair Tom Pentefountas later asked for Netflix’s production expenditure in Canada.

“Are you undertaking to do it, or do we have to order it?” Blais, who like Wright are trained lawyers, asked. Wright then asked if the information submitted could be guaranteed to remain confidential. “I never use the word guarantee. I am ordering you again to provide the information,” Blais next said, continuing to load Netflix up with weekend homework.

Wright in her opening remarks to the CRTC pointed to Netflix not being required to offer Canadian content, but did so anyways, both in Canada and abroad.

Given the popularity of Canadian content on Netflix Canada, Wright argued against regulatory intervention online. “Given this success, regulating internet content appears unnecessary. Worse still, it could generate outcomes inconsistent with public policy objectives,” she added.

But Wright was reluctant to provide key data on Canadian content expenditures when later ordered to do so by Blais and Pentefountas.

“Yes, again I have to assess whatever information we have that will be responsive to that. I don’t have that off the top of my head,” she said when ordered to provide confidentially how much Netflix paid for rights to Canadian content. She insisted some “data roll-ups” that the CRTC was asking for could not be pulled together over the weekend.

“Then I’m going to have to order you to provide that information by 5 p.m., or whatever date we will amend depending on the information we receive on Monday,” Blais said, pushing back.

Pentefountas, while joking at times with Wright, during his questioning also said her reluctance to accept CRTC requests for information represented “a heck of an answer for someone who takes hundreds of millions of dollars out of the Canadian economy.”

Wright held her ground, telling the CRTC that the lack of a guarantee of confidentiality threatened that key business data from Netflix could be made public.

“We were given to understand that in submitting information to the commission, while it could be given treatment, in fact it could not be guaranteed confidentially if somebody decided to request the commission make it public and apply a public interest test,” she argued.

“We understand that, and the assurance has been quite clear,” Pentefountas said.

When the CRTC vice chair handed the questioning baton to Blais, the discussion with Wright then settled down to other business issues, like promotion and algorithms operated by Netflix and how it was selecting and streaming French language programming in France.

Wright also promised to get back to the regulators about details of Netlix’s operations in Europe. Canada is looking closely at how the company deals with government oversight in France, where the ministry of culture imposes a 2% VOD tax on revenues that are north of 10 million euros, and does not allow films to be streamed on SVOD services less than 3 years after their initial distribution.

The CRTC wants to know if the U.S. company is willing to appease the French by following rules around discoverability and funding of local content, and if so, why it wouldn’t be able to do that here.

“How long do we have to wait for a Canadian House of Cards or Marseille?” Pentefountas asked.