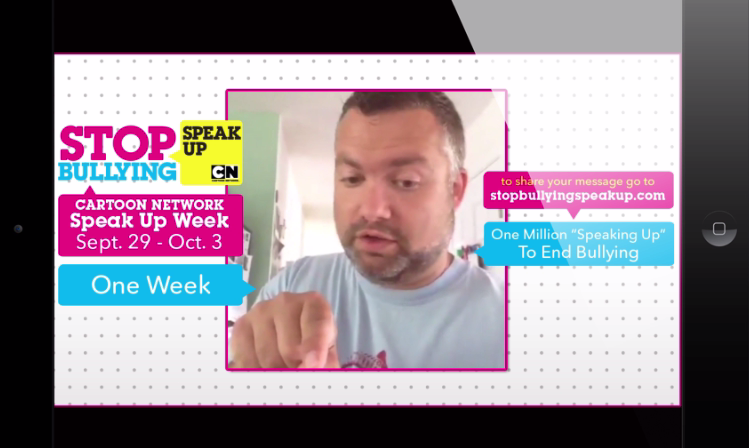 In partnership with FullBottle, a digital company that works with influencers, 4 Viners are posting clips for the campaign throughout the month.

Cartoon Network is working with Viners on its annual anti-bullying campaign, targeting tweens, teens and families ahead of National Bullying Prevention Month in October.

For the past 3 years, Cartoon Network has partnered with FullBottle, a company that matches clients with online influencers, on the initiative called Stop Bullying: Speak Up. After considering different social media platforms, the digital company determined that this year Vine would be the ideal venue for a series of micro-videos to complement the campaign.

The channels they’re working with are Tony of Bottlerocket, Jack Dytrych, Maddy Esther, and Mike Bennett, some of whom have already posted clips on the project. Using an internal system, the company determined which creators had the high audience engagement rates (likes, shares, and comments divided by followers) needed in order for the campaign to be most effective, says Eric Wachs, VP of marketing at FullBottle.

“There are pretty easy ways to game the system and … just buy followers or buy likes,” Wachs says about the importance of vetting creators before pairing them with clients. The Viners had creative freedom on the project but did receive campaign guidelines. They are paid per post, with the remuneration based on the size of their audience and production labor that’s required for the post. A stop-motion animator would command a higher price than somebody who’s shooting a scene with their family, for example.

“I think it’s important when you’re working with different creators on Vine that you provide good guidelines for how to keep not only their page brand-safe, but also guidelines around keeping the content up for a prescribed period of time,” Wachs said about getting the most out of the month-long execution.

FullBottle is also turning the Vine clips into ad units, placing them across its distribution network of publishers they work with including MiniClip.com, GirlsGoGames.com, and VOD site Kabillion, on which the ad appears as video pre-roll (featured image). Wachs says the engagement rates in previous campaign executions have been over 5% — outperforming the creative that’s given to them by ad agencies.