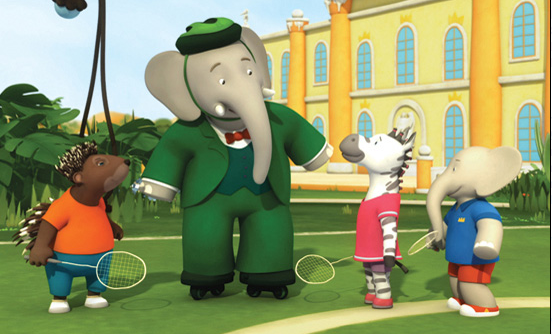 American children will recognize Babar the Elephant, but the millions of German-Americans might know significantly less about Babar, Der Elefant. Similarly, kids in the U.S. might like to watch Franklin and Friends, but would French-American parents prefer their children watch Franklin et ses amis? While the U.S. is a melting pot of different cultures and languages, TV channels often don’t air episodes if they are not in English or Spanish.

“The market for Chinese VOD may be small in and of itself, but if you aggregate all the minority communities together, it’s really quite large,” says Aly Jetha, co-founder and CEO of Oznoz.

To increase the series’ reach to children in multiple languages, online multilingual channel Oznoz has inked an agreement for 400 half-hours of programming from Toronto-based Nelvana Enterprise’s library. The 50/50 revenue-sharing deal will give U.S. Oznoz customers the chance to view Franklin, Babar, Beyblade, Bakugan, Scaredy Squirrel and Ruby Gloom in languages such as Arabic, Hindi, Mandarin, Japanese, French, Korean and German.

“For us, it represented a whole new way of monetizing a catalog,” says Colin Bohm, VP and head of Corus Kids, of which Nelvana is a subsidiary. It also adds value with little incremental costs, as the shows were already dubbed in-house for non-English-speaking territories.

Not every show will be available in every language, but it depends on which dubs are already available. “It’s more of a checkerboard,” says Aly Jetha, co-founder and CEO of Oznoz. “The market for Chinese VOD may be small in and of itself, but if you aggregate all the minority communities together, it’s really quite large.” The 3-year deal with Nelvana will bring Oznoz’s total content offering to more than 2,000 hours.

“There’s a nice niche opportunity for content owners that only promises to grow.”

Currently available as an iOS or Android app, Oznoz acts like iTunes, where individual shows can be purchased (typically priced between US$0.99 and US$1.99, though some entire seasons can be purchased at a discount). First episodes are also often free to see if a child likes the show. As the platform grows, the founders hope it grows into a subscription model, à la Netflix.

The Oznoz VOD platform currently has multi-year deals with Sesame Workshop and HIT Entertainment, showcasing shows like Elmo’s World (in Arabic, Chinese, French, Persian and Spanish) and Thomas & Friends (in Arabic, German and Korean) to US audiences.

There’s also content from the animation studio Big Bad Boo, which Jetha started with his wife Shabnam Rezaei, that produces series like 1001 Nights (in Arabic, Chinese, English, French and German) and Mixed Nutz (in Arabic, English, Hindi and Persian).

Sesame Workshop content has been most popular thus far, Jetha says, while the most-watched languages are Arabic, Chinese and Persian. Right now, the company’s focus is to continue to add more content in more languages. “We quite eagerly need more Hindi, Japanese and Korean content,” he adds.

Oznoz also receives frequent requests to add more languages to its current slate — most often Portuguese, Hebrew and Russian. “We might have 3 shows in Russian, but we don’t want to release it yet because it’s not enough to hold together a whole channel,” says Rezaei, co-founder and president for both Oznoz and Big Bad Boo.

While Oznoz is currently available in the U.S. and Canada, the founders have plans to eventually roll out overseas. There is no shortage of secondary or tertiary language opportunities abroad, from the Turkish population in Germany to the South Asian communities in the U.K., Bohm says. “There’s a nice niche opportunity for content owners that only promises to grow.”