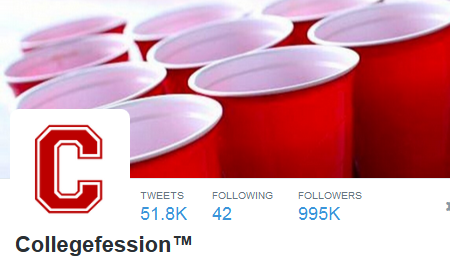 Finding ways to finance projects and grab an audience’s attention are two of the most difficult goals to achieve in the production business, says Matthew Shewchuk, director and producer at Evoke Filmworks.

“If you can get both, you’ll have a chance at paying the bills long term,” says Shewchuk, who directed Highway Thru Hell and Ice Pilots NWT 6.

A recent deal with a up-and-coming digital property gives his Quebec-based production company that opportunity, he says. This month, Evoke Filmworks signed an exclusive deal with @Collegefession, an American Twitter account that launched in January and is now just shy of a million followers. The account posts anonymous confessions from students, mostly about drinking and sex, submitted through its website, revealing only the school the incident comes from.

While it may seem unusual for the prodco behind Comedy Central’s Almost Vacant and Discovery Middle East’s Desert Falcons to cut a deal with the Twitter account, Shewchuk says he likes the idea of working with an increasingly popular handle. Whether @Collegefession will see the same level of success as “Shit My Dad Says,” which received a book deal and later adopted for a TV series, or the always on-point “Shit Girls Say”, is too early to tell. But the filmmaker says it’s important to stay alert for new revenue streams.

“We’re in the business of producing content and telling stories, and that’s just what we’re doing with this deal. Also, this is a very sought-after demographic, and how could I not consider looking at forming a partnership? You’d be insane not to see the potential,” he said in an email interview to StreamDaily.

To start, Evoke will try to raise Kickstarter funds for a feature film, and begin casting the project through video submissions posted on the Collegefession site. They will also roll out TV concepts to broadcasters and other distribution channels, and approach brands to start a branded content program. Videos will be distributed on YouTube, with branded content campaigns also extending out to Vine and Instagram.

Shewchuk says that as part of the deal, Evoke Films is the only company allowed to produce video content under the Collegefession name. He says all revenues collected from projects the companies work on together will be split between them.

“Aside from the online content, we are in the process of writing/creating an e-book … that takes the best/top tweets, groups them into themed chapters. There will be commentary from comedy writer and author Phil Price. The book will be much like the New York Times bestseller Shit My Dad Says. Our title will be similar and (is) currently entitled Shit Co-Eds Say.”