Fullscreen announced on Wednesday that it has signed Jack Baran, whose social media footprint includes a YouTube channel (ThatSoJack) with 896,000 subscribers, along with big followings on Twitter (886K) and Instragram (726K).

Baran is the second big name to make the jump to Fullscreen from competing multi-channel network AwesomenessTV in recent months, following the June signing of Jenn McAllister, whose YouTube channel JennXPenn has 1.4 million subscribers.

Fullscreen prides itself on the 360-degree talent management program it provides for its digital stars. The goal is to take his Baran’s vlog-style videos focusing on tell-alls, “ask-me-anything” games and pop culture rants beyond AdSense monetization and parlay them into mainstream media deals. 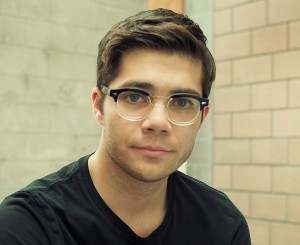 “The thing I love about vloggers is they’re kind of like tofu,” says Andrew Graham (pictured right), who heads Baran’s management team at Fullscreen with Rana Zand. “They take on the flavor of the environment around them.”

Baran is interested in doing podcasts and maybe radio, as well as traditional hosting work.

“I think those are really low-hanging fruit for him, because he’s already sort of proven himself in that format,” Graham says.

Baran would also like to try his hand at acting.

For that, “Jack’s going to start taking acting lessons and we’ll set him up with a really good talent agent, as well,” Graham explains. “So that’s going to be a slower build.”

Of course, plans are one thing – results are another.

Fullscreen hooked up Baran with an attorney before the signing, but he was already interested in coming over, in part due to the experiences his friends Anthony Quintal (Lohanthony) and McCallister were having at the MCN. That helped seal the deal, Graham says.

Quintal’s Fullscreen-orchestrated deals include a role in the AT&T mobile series Summer Break, produced by Astronauts Wanted and The Chernin Group, and a hosting gig on the Teen Wolf After After Show for MTV.com

Since joining Fullscreen, McAllister’s non-YouTube activities have included a web cast for Sears and a meet-and-greet and a red carpet live tweet from the MTV Video Music Awards, and she’s in the process of locking down a deal with a teen retailer.

Fullscreen will be helping Baran optimize his YouTube channel, improving his thumbnails, increasing his posting frequency and involving him in more collaborations. But the big plays for Baran and other digital stars of his ilk are to be made off-YouTube, not just with brand deals and TV talking-head appearances, but equity stakes in new social media platforms and apps.

“They’ve conquered internet, now it’s time to build a career in other areas,” Graham observes. “The only way you build a lasting talent is to put a strong bet on every possible media category you can. And that’s not even a surefire bet, but it’s the best way you can do it.”