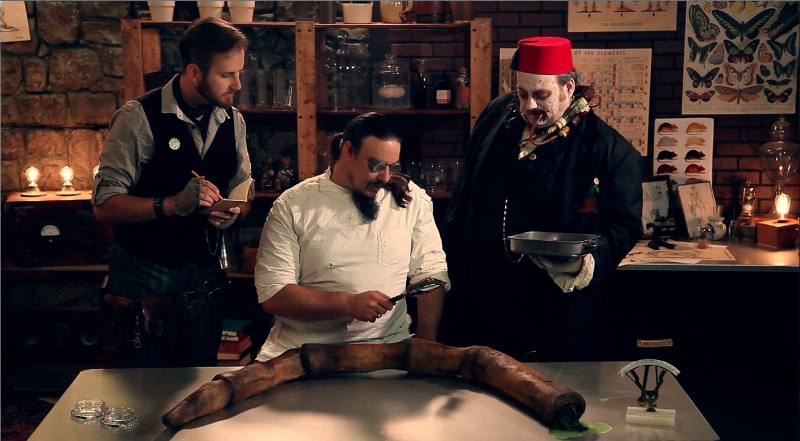 L.A.-based transmedia collective brings back The Adventures of the League of S.T.E.A.M. after a long hiatus - find out how, and why, they did it.

The world of online video has changed a lot in the 2-and-a-half years since the L.A.-based transmedia collective The League of S.T.E.A.M. completed season 2 of their web series, The Adventures of the League of S.T.E.A.M. Creators need more to stand out in the crowded field, and retro-futuristic steampunk-inspired collective got it through a Kickstarter campaign, raising $30,892 for season 3 of the series, which debuted this week.

“Many of (the Kickstarter contributors) are friends, some are fans, and some people just love to support the arts,” says series executive producer Trip Hope, adding that many contributors came from around the globe, including the U.K. Australia, Germany, France and Italy.

“It’s taken us longer than expected, but during pre-production we’ve taken the time to develop and write all our scripts before filming,” Hope says. “Our budget for costumes, gadgets and set builds, plus locations, insurance and (craft services) makes every cent precious.”

Unfortunately, there aren’t enough of those cents left over for an old fashioned marketing push for the new season.

“Our marketing campaign is simply asking all our friends to share on all social media,” Hope says. “We are also reaching out to all our friends in the steampunk community and geek communities everywhere. ”

During the show’s long hiatus, the League of S.T.E.A.M. was distracted by a wealth of other endeavors, such as live theatrical shows (including The Benefits of Zombie Domestication), a podcast, projects for Walt Disney Imagineering and E3, and numerous convention appearances (including San Diego Comic Con, Dragon Con and Wild Wild West Con).

“When we’re filming our web series truly takes over our lives and there’s no time for much of anything else,” Hope says. “So it seems we’re creating an organic way of doing things for our group – which seems to be a year focused on the web series, then a year of conventions and live shows. We wish we could do it all, but most of us have day jobs too – many within the industry.”

The plot revolves around the misadventures of a wacky team of Victorian-era monster hunters and paranormal investigators.

“We intentionally try to keep things PG and funny,” Hope says. “We think the gadgets, monsters, and supernatural comedy appeals to both kids and adults. It is certainly for a steampunk audience, but also for anyone that enjoys good science-fiction fun. We don’t take ourselves too seriously and hope geeks every where will appreciate all our ’80s TV show and movie references.”

There will be a total of 10 new episodes in season 3, with an average length of 10 minutes each. New episodes will debut every 3 to 4 weeks, with special features and behind-the-scenes videos at intervals in between. That’s the plan, anyway.