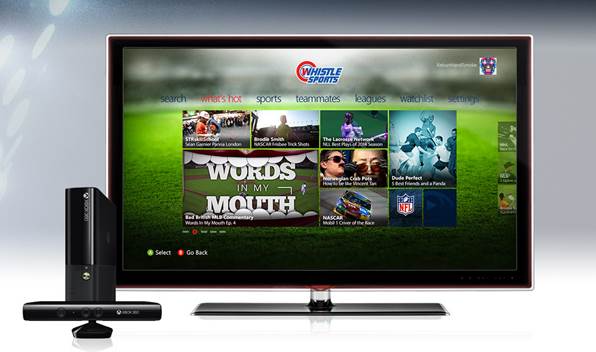 John West, founder and CEO of The Whistle, talks content strategy and explains what makes his sports app unique.

The Whistle’s Xbox 360 sports content app, which has been in the works since last year, launched today with Subaru on board as a sponsor.

Developed with The Whistle’s tech and equity partner MLB Advanced Media, the app features 500 videos from both league partners and YouTube content creators like Dude Perfect and Brodie Smith. The library will be updated daily, including exclusive videos such as NFL footage that cannot be streamed on YouTube, as the NFL does not have an official presence on the Google-owned platform.

This type of original programming — player interviews, behind-the-scenes specials, and aggregated collection of cool, funny clips aimed to entertain the millennial-and-younger demo — allows The Whistle to stand out from other apps and digital sports networks, explains John West, founder and CEO of The Whistle.

“The experience that we’re creating allows today’s generation to find all their sports in one area,” West says. The Whistle’s short-form videos on Xbox are unique because they are “not just highlights, which I think a lot of other sports apps can be,” West tells StreamDaily.

Launched in January, The Whistle has about 17,000 videos uploaded across its network and is growing its 6.7-million subscriber base by 150,000 people a week. It has content partnerships with NASCAR, PGA Tour, MLB.com and MLS. Channel partners who are featured on Xbox will be promoting The Whistle app, which Microsoft is also listing in the new releases section to help with discovery, West says.

As a launch sponsor, Subaru is executing an app takeover that will be integrated in original videos. Other advertising opps are also available.

“There are several other brands that we’re talking to around sponsorships, branded videos, branded content and also advertising pre-roll within the app. The way our app is designed, there’s great opportunities for sports-related brands to reach this digital-native audience,” West says.

As for why this gaming console was the best to launch The Whistle’s first gaming console app on, West says he was impressed by Xbox 360’s reach (84 million units sold), popularity among the millennial demo, and video consumption stats (42% of subscribers watch more than 30 hours of content on their Xbox each month).