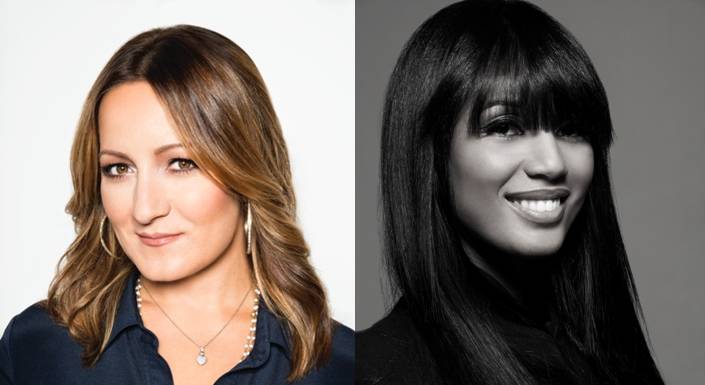 The media co adds Liz Hausle as EVP of marketing and Carmen Murray as GM to All Def Music, its partnership with Universal Music Group.

All Def Music announced on Thursday that it has hired Liz Hausle (pictured, left) as EVP of marketing and Carmen Murray (pictured, right) as GM, in charge of artist development and label relations across all platforms.

All Def Music is a partnership between All Def Digital, a multi-platform new media company co-founded by Russell Simmons and Steve Rifkind, and the Universal Music Group (UMG).

Hausle most recently served as a VP of Roc Nation (an entertainment company founded by Jay-Z) with artist management, music publishing, touring and merchandising, film and film and television production divisions, as well as a record label distributed by UMG. There, she worked on projects with artists such as Rihanna, Shakira, J. Cole and Timbaland.

Murray is co-founder of Title 9, a management and production company with a roster of talent that includes producers Jerry Wonder of the Fugees and Andre “Dre” Harris, DJ Budddha, and singer/songwriter/producers Andrea Martin and Angela Hunt.

In March, All Def Digital launched ADD52, a new online platform for emerging artists that’s part of the All Def channel on Samsung’s MILK music streaming service. ADD52 is releasing one new single a week by new talent. Artists are invited to upload their songs and videos to ADD52.com, then use tools on the site to promote their work on ADD52 and across social media. A panel of judges selects one track per week, which is then made available for purchase within the iTunes store.

ADD52 plans to grow its content ecosystem to include audio, music videos, profiles, live performances, collaborations with established stars, and a slate of artist-focused video content that will live on ADD’s YouTube channel.

Since its launch, ADD5 has had success with Nikyee Heaton, who has sold over 11,000 copies of her single and has averaged 40,000 unique listeners a day on Spotify; Tayyib Ali, who has racked up nearly 600,000 views of his music video on All Def Digital’s Youtube channel; and Love Dollhouse, which had the #1 most added record at radio in June 2014. Each artist released by ADD52 is signed to ADM and supported by UMG. ‎