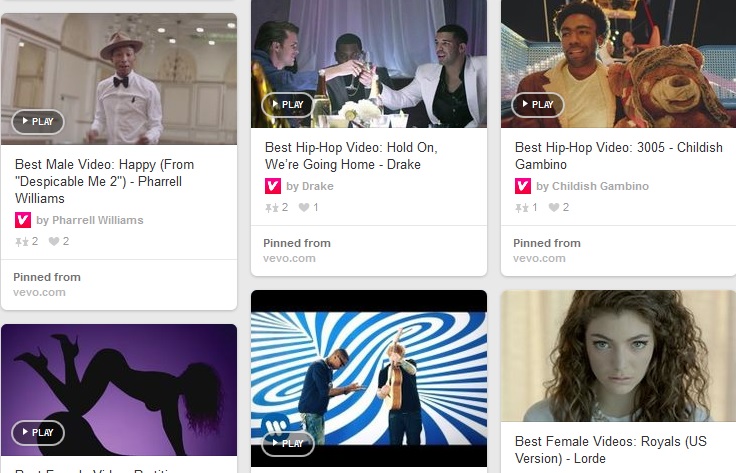 The social media startup continues to bolster its media offerings with the partnership, which will increase sharing of music videos and Vevo's original programming.

Vevo has become the third external video player to be integrated into Pinterest as the scrapbooking platform continues to bolster its media and entertainment partnerships.

The syndication deal will allow Pinterest users to tag and share Vevo clips, including popular music videos (pictured) and original programming. Pinterest, which allows users to bookmark items, images and media, also has deals with YouTube and Vimeo.

As with Vevo’s other syndication platforms, pre-roll ads can be embedded on the videos that are shared on Pinterest.

Pinterest is meant to be a source of visual inspiration for users as they plan their outfits, meals, home decor or trips. Increasingly, it’s also used to share articles and other media. As pointed out Tuesday by tech blog Gigaom, this job posting for a manager whose task would be to forge relationships with publishers suggests the startup wants to expand its news and entertainment categories. A Pinterest spokesperson told Gigaom that media is a growing category and that the company “wants to focus on continuing to develop these relationships in market.”

In May, Pinterest raised a whopping $225 million in new funding, putting its valuation at $3.8 billion.