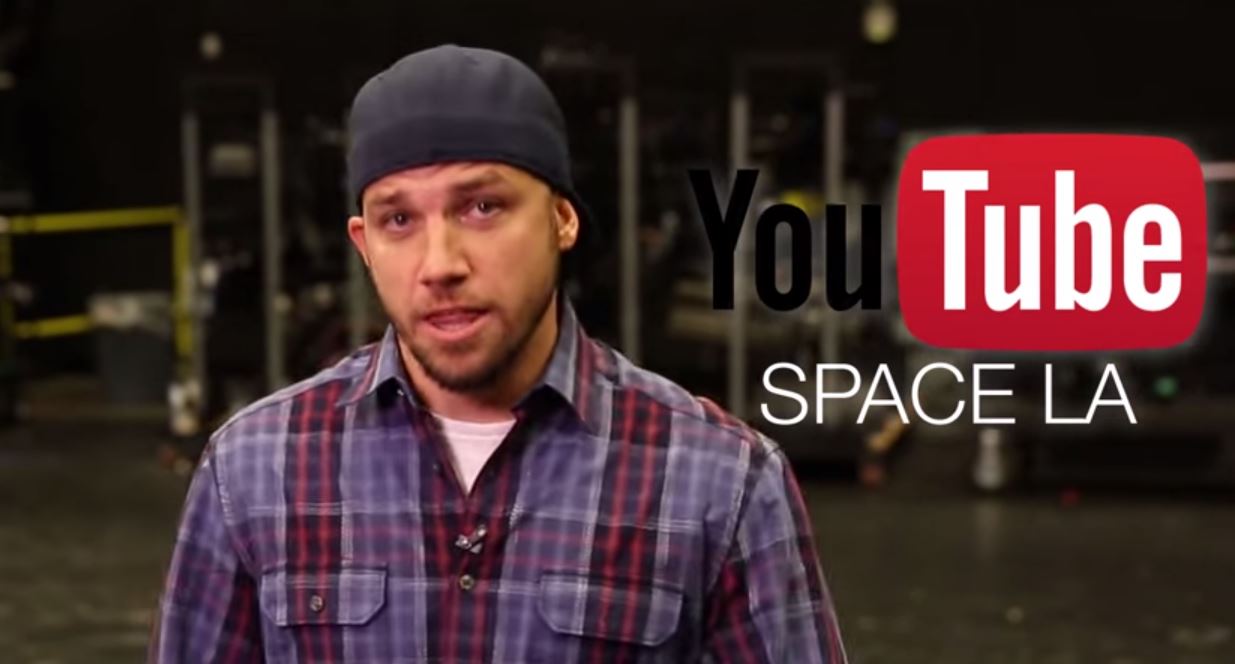 Lloyd Ahlquist (a.k.a. EpicLLOYD) reflects on the history of his Epic Rap Battle journey, as he returns to his improv roots with Off the Top.

When Lloyd Ahlquist staged the 2-day live interactive global interactive improv event Off The Top at YouTube Space LA last week, it was an artistic homecoming of sorts for the actor/writer/producer, better known as EpicLLOYD.

Ahlquist is famous as one half of the creative team (with Peter Shukoff, a.k.a. Nice Peter) behind YouTube sensation Epic Rap Battles of History. The duo has racked up nearly 10.7 million subscribers and 1.2 billion views with their videos pitting everyone from Darth Vader and Adolf Hitler to John Lennon and Bill O’Reilly against each other in humorous lyrical throwdowns. But his roots are in live improv comedy.

Ahlquist came to L.A. with his improv troupe Mission IMPROVable in 2005 to develop a pilot for MTV that ultimately didn’t get picked up. So the troupe purchased the Westside Theater in Santa Monica, CA, where he was toiling away when YouTube success hit.

“The second video I ever did had 80 million views, and it kind of took off from there,” Ahlquist told StreamDaily a few days prior to Off the Top. “But there was definitely a lot of build-up to that in my career. I’m one of those guys who took 15 years to become an overnight success.”

Q: When you initially posted Epic Rap Battles of History on YouTube, did you have any lofty or ambitions for it, or were you thinking, “What the hell? Might as well.”

A: Pete and I had been friends because we toured together with Mission IMPROVable for years. I did a lot of rap music, and he did a lot of regular music. That was our thing that we had in common, so we would jam out, and every once in awhile we would get together and make a funny little song or something. I was the general manager of the comedy theater at the time, and Pete was just starting to do YouTube videos. And we made the first rap battle, and it did pretty good, but I didn’t really expect that. It was before YouTube was a big moneymaking kind of thing that it is today. So we made the video and put it up. Then the second one we did, which was Vader-Hitler, just exploded and went completely all over the world. I was still working at the comedy club until maybe the eighth or ninth episode, and then finally it got to the point where it was like, “Hey, man, we’ve got to do this full-time,” so another one of my business partners took the general manager job at the theater.

Q: How soon did the Hollywood sharks come knocking after Vader-Hitler hit?

Q: How did you hook up with Maker Studios? Did you just log on to their site and sign up?

A: No. It was before Maker was Maker. It was called The Station. It was a collective of the bigger YouTube stars, like Shay Carl Butler and KassemG (Kassem Gharaibeh), Timothy DeLaGhetto (Tim Chantarangsu) and Lisa Donovan. One day I got an email from their office saying, “Hey, you’re a comedy club. We’re putting together this YouTube thing. We’re looking for writers for a small paycheck to write for these things. Is there anybody who you think would be good for this?” So I was like, “Yeah, my buddy Pete makes songs. He’s awesome.” So Pete got hired to write little sketches and songs. My friend Zach (Sherwin) and would do this show where we would take suggestions from the audience, and then we would freestyle rap battle live right on stage. Pete saw the show and he was like, ‘We should make a video out of that.” And that’s how Epic Rap Battles of History was born, right at the Westside Comedy Theater.

Q: What has Maker done for you as far as growing your business?

A: It’s a partnership that’s been super mutually beneficial everybody involved. We’re very, very lucky to be a big project, and I feel like that makes our experience different than 95% of the people out there, because when you’re dealing with the multi-channel network and you have a lower number of subscribers, it’s much harder to get that attention. We get our production resources through them, and now it’s been purchased by Disney, so we have access to anything from Star Wars characters to Marvel characters to sports people. The trajectory of the growth of rap battles has been very parallel to the growth of Maker. We’ve both had our growing pains in terms of like of, like, how do we handle this? What’s going on? We’ve been good at working with each other, back and forth.

Q: What does Disney’s purchase of Maker mean to you and Epic Rap Battles? Are you talking about TV shows, features?

A: It’s been sort of business as usual for us. The very best that Epic Rap Battles of History can do for either Disney or Maker or even us is just continue to make Epic Rap Battles of History. This is my down time, doing Off the Top. If we wanted to make a TV show, or we wanted approach the development department about a certain project, I feel like those fruits are very ripe, but it would have to come in place of making Epic Rap Battles, because they’re so tough to do. So until we stop making (them), I don’t think we’ll do another project that is of that that scale for awhile. But it’s nice to know that the opportunity is there.

Q: Any thought that you might hit the road again now that you have a name?

A: Mission IMPROVable does about 300 to 400 shows a year. We have six different touring companies that go all over the globe, so we never stop touring. I don’t tour anymore, but we do auditions every year in L.A. and Chicago and offer young comics their first paying gig. That’s one of the things I’m most proud of. We send guys and girls in a van, we give them health insurance, and they do shows at colleges. For a lot of them, it’s some of the best times of their lives. I think touring is a young man game. When I did it, I was so happy doing it. I’ll do it again, probably on a different level. But when you’re on the road doing that many shows, with a 10-hour drive to the middle of Nebraska to do a show at 10 in the morning, and then you get back in the van and you’re in Wisconsin that night at 9:30… I’d never be able to do that and the videos at the same time.

Q: Do you get a lot of young YouTubers asking you for career advice? Do they have common misconceptions?

A: I feel like people think it might be easier than any other form of entertainment. Their goal is to make a viral video, rather than to just make an awesome video. I say, “Don’t read all these books and interviews about what makes a video viral, because every different mega video has different reason why it that way.” Just concentrate on making something that you really love and don’t worry about the money or the hours. You’re going to need to grind and work really, really hard. And that’s the best advice I can give.

Image screengrab from Off the Top preview video.