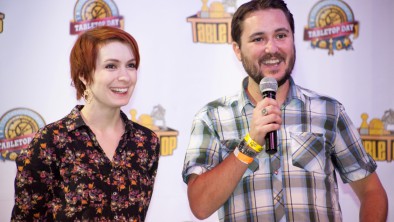 The multi-channel network, co-founded by Felicia Day, will join Chris Hardwick's Nerdist Industries in the digital stable of Legendary, known for such films as Godzilla and Pacific Rim.

Legendary will develop scripted and non-scripted digital and TV projects for the company, co-founded by Felicia Day.

Since launching in 2012, Geek & Sundry has amassed more than 1.4 million YouTube subscribers with such shows as TableTop, hosted by Wil Wheaton (pictured, with Day), The Guild and Talkin’ Comics. It also produced the sci-fi comedy series Spooked, shown on Hulu and YouTube, with Bryan Singer’s Bad Hat Harry Productions.

Legendary has demonstrated similar taste, producing Comic-Con-ready genre pictures as Pacific Rim, Godzilla and the upcoming As Above, So Below. In 2012, it acquired Nerdist Industries, known for its podcast hosted by co-founder CEO Chris Hardwick and its titular YouTube channel.