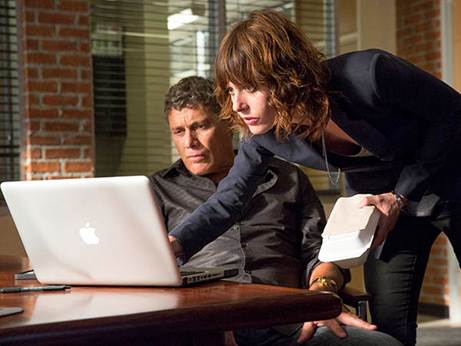 Fans of the hit Showtime series Ray Donovan will get a bonus when they tune into the Liev Schrieber-starrer this Sunday: the first of three companion webisodes.

Written by Cheo Hodari Coker and directed by Michael Tolkin, the webisodes, entitled Behind The Fix,  feature Donovan henchman Avi  and Lena, played by Steven Bauer and Katherine Moennig (pictured),  revealing how they help pull off their “fixes,” in an extended storyline interwoven with the corresponding episode plot.

Each webisode will be available on SHO.com, YouTube, iTunes, SHO Sync, Showtime On Demand and Showtime Anytime immediately following the 9 p.m airings of the August 3, August 17 and September 14 episodes.

The August 3 webisode offers viewers an inside perspective on how Lena gets one of Ray’s clients a fake identity to extradite him out of the country.