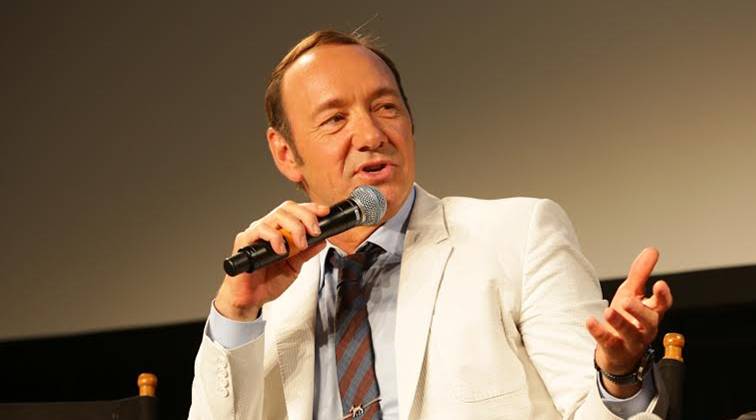 Actress stars in 3 shorts, which are sponsored by Jameson Irish Whiskey and Spacey's Trigger Street Productions, and made by amateur filmmakers.

Netflix’s House of Cards star Kevin Spacey paid a visit to YouTube Space LA on Saturday to premiere films shot by the winners of the Jameson First Shot contest, all 3 of which star Uma Thurman, who was also in attendance.

Sponsored by Jameson Irish Whiskey and Spacey’s Trigger Street Productions, the competition gave unknowns from Russia, South Africa and the U.S. the opportunity to shoot self-scripted short films with a Hollywood star. Spacey starred in the films in the contest’s inaugural year, 2012, followed by Willem Dafoe in 2013.

This year’s winners are Jessica Valentine from the U.S. (Jump), Ivan Petukhov from Russia (The Gift) and Henco J from South Africa (The Mundane Goddess).

The films are available for viewing on the Jameson Irish Whiskey YouTube channel. So far, the most-watched is The Mundane Goddess (above), which has garnered nearly 160,000 views since it was posted on July 26. 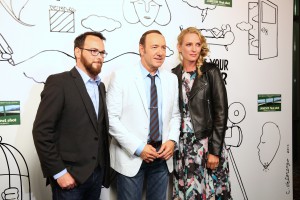 The contest was open to entrants from South Africa, Russia or the U.S. who were at least 25-years-old. Entrants submitted scripts of 7 pages or less based on one of 3 themes (“legendary,” “humorous” or “a very tall tale”), which were judged by a team that included Thurman, Spacey and Trigger Street president Dana Brunetti.

A shortlist of 20 candidates was chosen and asked to shoot a scene from a script provided by Trigger Street and submit a director’s treatment of their script. Based on those results, the winners were chosen in April.

The winners were flown out to L.A. in June to shoot their short films with Thurman, with an assist from Trigger Street on everything from casting and wardrobe to the final score and posters, which were created by Chris Lorenzo (check out his process in the clip below).

Since 2002, Spacey and Brunetti have been offering unrepresented writers and filmmakers a chance to showcase their work and receive feedback through Trigger Street Labs. Trigger Street has also produced major Hollywood films, including The Social Network, Captain Phillips and the upcoming Fifty Shades of Grey.