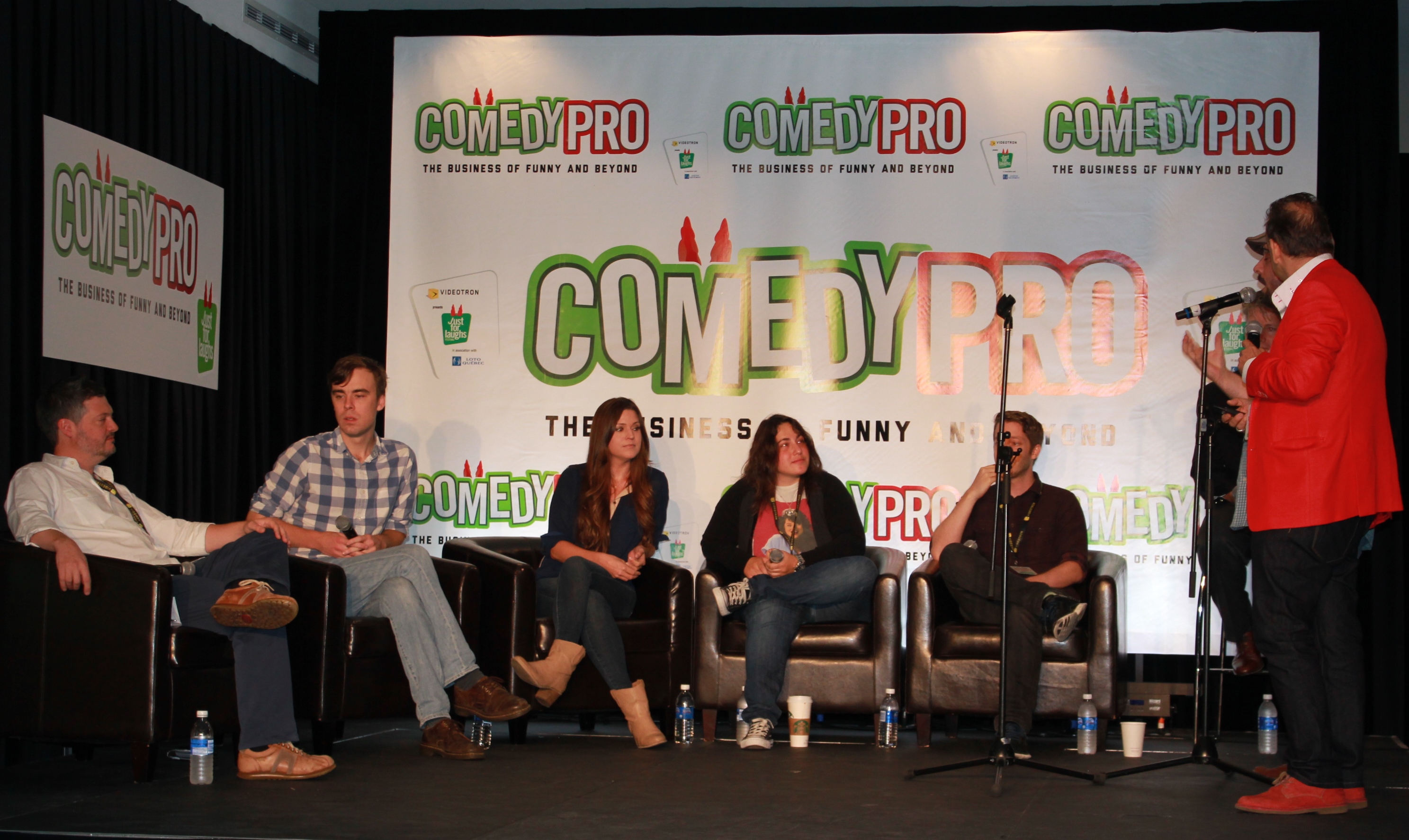 Web series Newborn Moms wins an option with Defy Media, but the panelists offered great advice throughout the entire competition.

They didn’t run out of the room crying like babies — there’s enough of that at home.

Nadine Djoury and Aurora Browne walked away winners Saturday at a pitch competition held by the International Academy of Web Television (IAWTV) and Just for Laughs in Montreal. The prize is an option agreement from Defy Media for their web series, Newborn Moms, as well as a membership to the IAWTV and tickets to the 2015 Awards show in Las Vegas.

Judging by the trailer, Newborn Moms will be a blend of cerebral and silly comedy as the show follows the two friends/moms for whom parenting feels like “there’s a garbage truck filled with poo and it just  … parks on your face.” Artistically, the other groups had ideas that were just as strong and presentations that were even funnier, admits Browne, but the Toronto-based sketch comedians got an edge on the competition by paying attention to “every aspect of the business.”

They provided detailed demographic info (77% of new moms use YouTube, compared to 61% of the general population); well-formed ideas and titles for upcoming episodes (“When Was the Last Time I Showered?”); and potential brand sponsors (Bombay Sapphire).

“We laid out the whole spectrum of the project succinctly so that the panel could see every aspect of it. I think one of the strengths of Newborn Moms is that it fulfills a real need in its audience, to see themselves and their experience represented, and that was clear to the panel,” Browne told StreamDaily via email.

Now that we know what the winners did right in the pitching session, let’s look at what they, and others, got wrong! Just kidding. In fact, the judges seemed impressed by all of the pitches, but they did offer great advice and insider tips that producers don’t often get to hear.

Below is a roundup of the most interesting feedback from the panel, which featured: Heather Brewster, director, scripted development at Fullscreen; Julia Moonves, director of network development, entertainment at Maker Studios; Pat Cassels, head video writer at CollegeHumor; Thom Zadra, head of business development for video at Yahoo, Spencer Gilbert, head writer, Defy Media, and J. Sibley Law, chairman of the board at IAWTV.

Your trailer looks a lot like a TV pilot

While this is a compliment — given to the Newborn Moms creators by Defy’s Spencer Gilbert, who said the tone brought to mind Broad City or It’s Always Sunny in Philadelphia — it’s also a reminder that when pitching for the web, transmedia elements are key. “Do you have any ideas to make it more webby?” Gilbert asked. Djoury and Browne suggested callout contests, personal vlogs, sharing and discussing personal parenting experiences with viewers through social media, as options to make their show more interactive. Social activations can also help build a fanbase and demo stats before a show even launches, which makes it easier to sell to both brands and digital platforms.

It could be Seinfeld, but is it Seinfeld?

Great ideas don’t exist in a vacuum. The premise of After L’Amour, pitched by Phillip Rodrigue and Yves St. Gelais was reminiscent of Above Average’s The Morning After, with a more cheeky (French Canadian?) take on post-coital conversation. Daniel Hurwitz’ Charles, By The Way had an interesting twist on the awkward-single-guy premise in that every episode would take place in a coffee shop, where Hurwitz himself lusts after potential marriage material (in a cute, not-too-creepy way). “The lovable schmuck who has no luck with girls is the most common pitch that I get,” said CollegeHumor’s Pat Cassels. That’s basically the pitch for Seinfeld, he added, but is it Seinfeld? A sharpening of individual episodes and characters can give those who are being pitched a better sense of potential success. It can also help define a creator’s unique selling point, or how this particular idea is different from similar formats out there.

Just like in job interviews, the most obvious question tends to be the one that throws the candidate off the most: “Why do I want this job? Uh…”  Almost all of the creators were asked where they see the web series going and what their long-term plan was. Nearly all responded with “web for now, would love to get on TV later,” but the panelists seemed to want a hear a clear vision for the format. New Yorkers Drew Miller and Nick Cherneff want to turn their domestic stand-up shows Live @ the Apt into a web series, which most of the judges felt would be a fresh take in digital comedy programming. But Yahoo’s Thom Zadra wanted to know from the creators what they needed to take their idea to the next level. “What are you asking of us?” said Zadra. Is it money for the production, help with the rollout? And what would they do with an influx of cash? Fullscreen’s Heather Brewster cautioned against bringing big-name talent on board, because the underground nature of the live shows is what makes them cool in the first place.

Tailor your pitch to the room

Chris Wilson and Peter Carlone upped the energy in the room by acting out some of their show Hardly Men, which is about 2 detective wannabes, using props like red confetti as a stand-in for human blood. While the presentation was fantastic for the audience at JFL, it may not work if pitching to poker-faced suits. Take the time to chat and take the temperature of the room, the panel advised, and remember – you’re not just selling your show, you’re selling yourself.

Here’s a trailer for the self-produced Newborn Moms. A few other sketches are in the editing process.