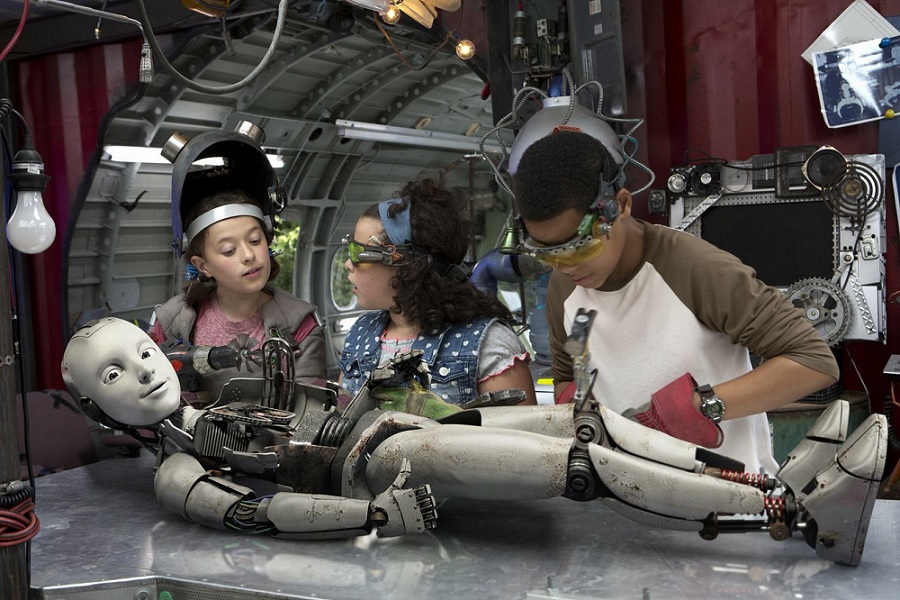 Bicycle-adorned carousels, high-tech hammocks and a junkyard full of materials just waiting to be turned into quirky inventions. These are just some of the features on the set of Annedroids, the latest original kids series on Amazon’s Prime video streaming service.

“For us, from a production company point of view, and one that loves to do interactive, the fact that we’re with a partner that has a Kindle device just opened up so many avenues. This is the gift that keeps on giving.”

Created by JJ Johnson (Dino Dan) and Sinking Ship Entertainment, the show targets kids ages 4 to 7. It’s launching in the U.S. and the U.K. through Amazon’s Prime Instant Video, with the first 7 episodes currently up for viewing.

The show is Amazon’s first live-action/CGI series for kids. It’s also one of the first to feature a female lead as a girl scientist with a penchant for inventing all manner of robots.

For Amazon, Annedroids is a part of its bid to become a leader in the kids content and SVOD space. The show is one of its 3 original kids series, along with Tumble Leaf and Creative Galaxy.

Prime members can now watch the series on Amazon Fire TV, Kindle Fire, iPad, iPhone, Roku, Xbox, PlayStation and Wii U. In addition, Annedroids will be available in Kindle FreeTime Unlimited, a service built specifically for kids that lets them access books, games, educational apps, movies and TV shows, with controls built in for parents to manage their kids’ screen time.

For Sinking Ship co-founder and Annedroids creator Johnson, having access to Amazon and its digital platforms means new ways for the more than 10-year-old prodco to tell stories: “Our ability to tell story has evolved over the course of production,” says Johnson. “For us, from a production company point of view, and one that loves to do interactive, the fact that we’re with a partner that has a Kindle device just opened up so many avenues. This is the gift that keeps on giving — in the past you would write an 11-minute or a half-hour and it’s done, it’s been locked off. You kind of had a story structure that was fairly familiar. This one can go anywhere.”

In step with its arced story lines, the series will come with appisodes, where kids can download an episode of the show and play games integrated into the show. The appisodes are slated to launch in the coming months.

Along with a digital push, the show is also winning views with its science-based approach. “I also think we’re doing the kind of science that kids actually like, which are things with explosions and melting and chaos,” notes Johnson. “We’ve structured it in a way that the Annedroids are the ones that get injured if something happens. That story device allows us not to shy away from the cool science that I think kids really want to learn about.”

The first episodes of the series are available via Amazon Prime. The show is also airing in Canada through TVO.

“(Producers at Sinking Ship) have a real sense of not just doing the traditional — they’re really trendsetters and we appreciate that and we’re also really keen on being innovative and looking at new technologies.”