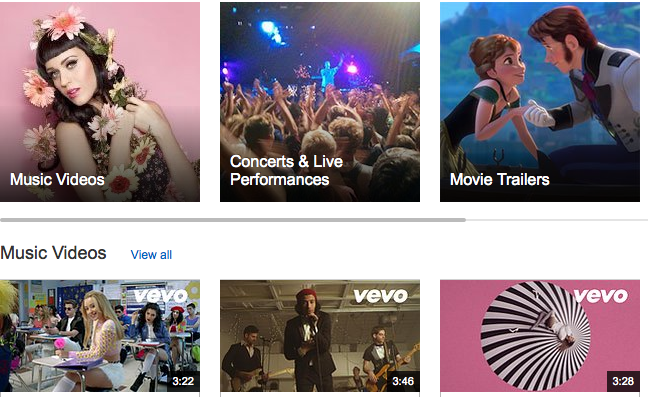 Gaming, beauty, music and movies are among categories represented on the Video Shorts site. Content partners include Vevo and Howcast.

Amazon has quietly been building a library of short-form video clips that are streaming on a special hub on the company website, and which are organized by genre.

The content is categorized on the “Video Shorts” site and is supported by pre-roll advertising much like YouTube and other digital media competitors Yahoo and AOL, albeit with a shorter library (there are 100,000 video clips on the site, according to Variety). The categories include beauty, gaming, movies, music, technology and food and drink.

The Video Shorts site seems to be an extension of Amazon’s core e-commerce strategy rather than a direct attempt to usurp competing video platforms. All of the video clips run adjacent to a product that’s related to the content. A beauty tutorial on “How to curl long hair,” for example, suggests several curling irons viewers can buy to achieve the look; a Sam Smith “Live on SNL” video displays his albums to the right of the clip, available for purchase. Those two videos in particular are distributed by Howcast and Vevo, which are just two of the content partners currently featured on the site.

Other content partners include publisher Simon & Schuster, which carries clips of authors discussing their novels, video game companies like Take-Two Interactive and Electronic Arts, and major studios like Disney, Paramount and Universal, which are streaming movie trailers on the site. Not all videos have a perfect e-commerce link: A trailer for Lucy, starring Scarlett Johansson, runs next to links selling books of the same name, but which don’t have anything to do with the film.

Despite reporting its Q2 earnings on Thursday, Amazon did not initiate a promo push or big announcement of the Video Shorts site. A TechCrunch reporter who discovered the site wrote Friday that it has been out for about 2 weeks.

Earlier this year, before Amazon launched its Fire TV, rumors swirled that the company was considering an ad-supported streaming service that would host both original and licensed content. At the time, Amazon denied the plans. A Wall Street Journal story that outlined the plans, stated sources had cautioned that plans could be delayed or cancelled, but that a free-streaming video play could (in addition to Amazon’s SVOD service Prime Instant Video) help Amazon “transform itself from a retailer into a force in multimedia.” Amazon did not respond to requests to be interviewed for this story at press time.