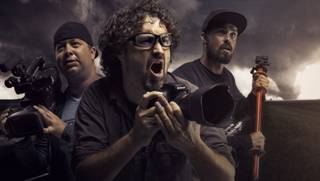 This is not a drill: Tornado Hunters web series part of CMT’s experiment

Corus-owned channel CMT will debut its first-ever digital series in August in Canada, using the web as a launch pad for an eventual broadcast slot.

Produced by Toronto-based Saloon Media, the show will launch its 5 episodes online on Monday Aug. 18, with prompts from CMT asking fans to provide input around the show through #CMTTornadoHunters. Responses will be used to shape the show’s pilot for broadcast, which will air at a later date.

Vibika Bianchi, VP, original programming of women’s and family TV at Corus Entertainment says that the show is part of a shift in direction for programming on the channel, looking toward more high-energy, dramatic and high-stake shows than it had previously commissioned.

It’s all part of research the company has done to better reach CMT’s target audience of adults 25 to 54, focusing in on suburban women. Bianchi says posting the online episodes first allows the channel to test how the new content will work with CMT’s audience, before the debut of the show on TV.

She adds that the online episodes, which will all be available at once, were also made possible with help from the Bell Fund.