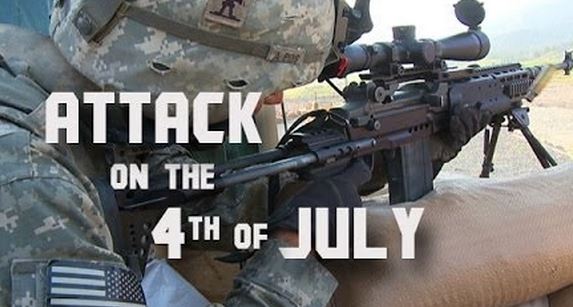 Attack on the 4th of July doc debuts on Hulu, All Warrior Network

The film, directed by Emmy-winning combat veteran Robert Ham, depicts a deadly 2009 assault on a U.S. military base in Afghanistan.

Americans looking for a more meaningful way to celebrate their nation’s birthday than barbecue and fireworks can stream Attack on the 4th of July. It’s a documentary about a deadly 2009 assault on a U.S. military base in Afghanistan that debuted last week on Hulu, Hulu Plus and TV4 Entertainment’s military-themed video-on-demand channel All Warrior Network.

Produced by Musa Productions and Television Four Studios, the short film was directed by Robert Ham, a 2-time Emmy Award-winner and 3-time winner of the Department of Defense’s Military Videographer of the Year award. The film contains real combat footage shot by Ham while he was serving in the U.S. Army in Afghanistan.

Attack on the 4th of July has an added relevancy because the events depicted occurred 5 days later and only an hour drive away from where Sgt. Bowe Bergdahl left his base in Afghanistan, leading to a controversial rescue mission that has caused a media firestorm in recent weeks. Ham and Bergdahl were both members of the United States Army’s 4th Brigade Combat Team (Airborne) 25th Infantry Division.

“We can’t say if this would or would not have still been an ‘Alamo’ situation if resources were not being used elsewhere,” said Ham in a statement. “But this film serves as a reminder of the constant danger our troops are in, and the bravery and camaraderie they exhibit even in the worst of conditions.”

In addition to Hulu and AllWarriorNetwork.com, the film can be viewed on the recently launched All Warrior Network (AWN) iPhone app.