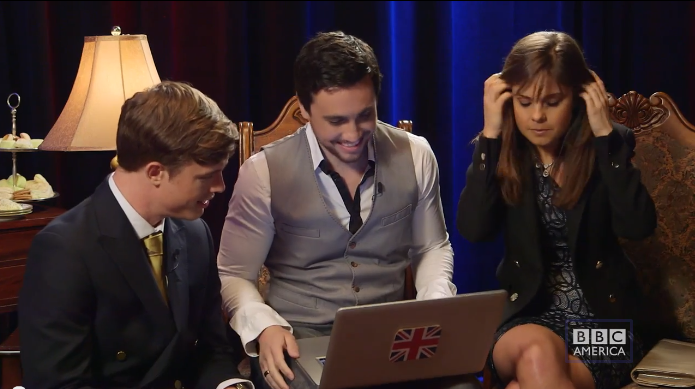 YouTube spinoff is ‘strictly a promotion tool, not a monetary play’

If a producer were to use an episode of Almost Royal Goes to YouTube as a pilot for a standalone series, it’s not hard to imagine a studio greenlighting it.

“We’re looking to reach an audience that we might not otherwise reach with our own on-air messaging or through our own social channels,” Matt Stein, SVP of marketing, promotion, and creative services for BBC America tells StreamDaily. “We’re sort of bringing these YouTube stars’ audience to our YouTube channel to expose them to this series. We think millennials will enjoy this show. It’s got a very hip sensibility.”

In Almost Royal, the Carltons traverse the U.S., interacting with unsuspecting real-life Americans. It is BBC America’s first original comedy series, and it’s getting a primo spot in the network’s schedule, premiering with back-to-back episodes on June 21 starting at 10 p.m. ET, following the season 2 finale of Orphan Black.

“We sent them two episodes of Almost Royal and explained what we were going after,” Stein says. “They got the joke and looked at it as a fun project to work on, so we didn’t have to do a lot of selling.”

The web series works as a cross-promotional perpetual motion device. While BBC America uses it to sell Almost Royal, the YouTube stars use it to sell themselves, which in turn sells the show even more.

“We shot pieces for Ethan’s What’s Trending show and everybody tweeted or posted on their Tumblr or (otherwise) promoted their appearance here,” Stein says, adding that the web series will be promoted on air. The first episode of Almost Royal is also available now for streaming on BBCAmerica.com and YouTube to encourage viewers to tune in on Sunday for the double-episode cable premiere.

Almost Royal Goes to YouTube was shot over the course of 2 days in early June at YouTube Space LA, which BBC America previously used for its Dr. Who 50th anniversary live pre-show in November.

Almost Royal Goes to YouTube was not created with YouTube monetization in mind. The series carries no brand sponsors or pre-roll ads.