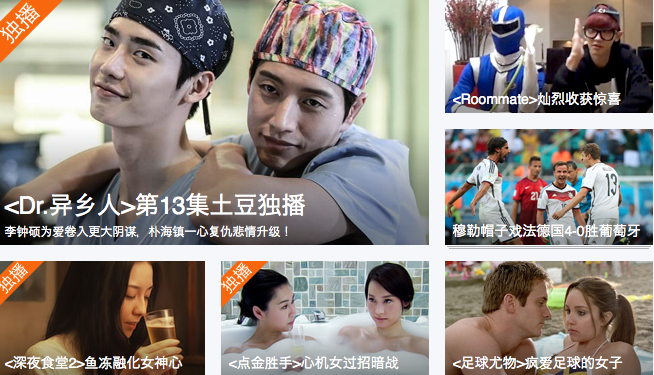 The Chinese web-TV giant says it's releasing more than 20 original productions in the second half of this year, including a show based on Tiny Times.

Beijing-headquartered web-TV company Youku Tudou says it’s releasing more than 20 original productions in the second half of this year, including a drama based on last year’s hit movie Tiny Times (cast pictured above).

In an announcement Monday the parent company of streaming services Youku.com and Tudou.com (screengrab) said investing in in-house productions is a priority, with new dramas, reality TV and talk shows launching in upcoming months.

One of the two new scripted series coming out this year is a show based on Tiny Times, a movie that follows 4 best friends as they move from high school to college, which reportedly made $73.8 million at the box office in the first 2 weeks of its release. A third installation of the film is coming out this summer. The franchise has a hardcore fan base comparable to Twilight in North America — a popularity that naturally comes with its fair share of detractors. The Youku Tudou show will premiere in July.

Another series called Midnight Taxi, a drama co-produced by Japanese director Shinya Shokudo, is also on the roster.

The rollout of the new, original programming began this month with a competition show called Searching Divas, which generated more than 10 million views and 10,000 comments within the first 2 days of its debut, according to a statement. Four new talk shows — a format that has proven popular on VOD with shows like Morning Call — are part of the new programming slate, including a series called Macroview which focuses on financial issues.

Youku Tudou spent US$52.4 million (RMB325.7 million) on content in the first quarter of 2014, which represents 46% of the company’s net revenues, according to the company’s Q1 financials. The company is listed on the New York Stock Exchange.