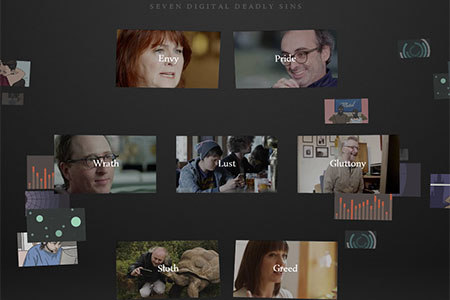 Seven Deadly Sins combines video with infographics, inviting users to reflect on the extent of their social media use.

The National Film Board of Canada (NFB) is teaming up with U.K. newspaper The Guardian to combat digital fatigue with an interactive project entitled Seven Digital Deadly Sins.

The project is a collaboration between the NFB, The Guardian, Toronto digital design agency Jam3 and the NFB’s Vancouver-based Digital Studio group. It combines documentaries with infographics, articles and polls, and invites users to reflect on the extent of their social media use.

The project also poses questions such as whether it’s okay to download films online and if we are posting too many photos of ourselves on social media through a series of seven short films featuring artists and media figures, as well as 21 first-person stories from a range of contributors. Participants include singer-songwriter Billy Bragg, comic Mary Walsh, novelist Gary Shteyngart and writer-filmmaker Jon Ronson among others.

Seven Digital Deadly Sins launches on NFB.ca on June 12, but is already available on TheGuardian.com.

The project is produced for the NFB by Digital Studio, and led by executive producer and creative technologist Loc Dao.