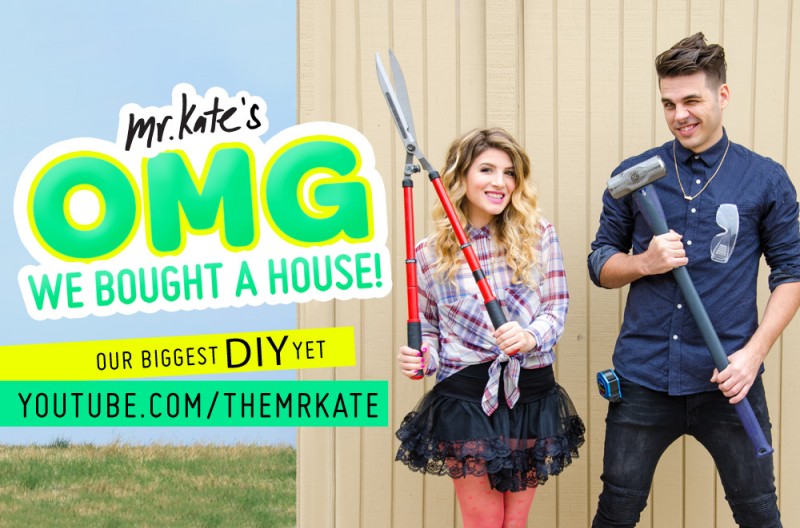 They bought a house, and everyone’s invited

DIY lifestyle guru Kate Albrecht and husband Joey Zehr on how they built their DECA-produced series OMG! We Bought a House as it hits 1 million views.

If DIY lifestyle guru Kate Albrecht, star of the YouTube channel Mr. Kate, and her husband Joey Zehr had known their online series OMG! We Bought a House would hit one million views in less than 6 months, they might’ve done a few things differently — like line up brands to provide everything from paint to appliances, as well as kick in some financing.

But, like many of life’s rites of passage, it just kind of happened.

Albrecht and Zehr are diversifying their Mr. Kate portfolio. Like many of her YouTube brethren, Albrecht is working on a book, to be published by HarperCollins next year.

“We were so busy when we were buying the house, it was almost an afterthought,” says Zehr of the show. “It was like, ‘Oh, crap! This is perfect. We should film this. We move in in a month.’ We kind of just did a run and gun and put the production team together. We have a deal with Lamps Plus, because Kate had designed a line of lampshades for them last year, so they’re supplying us with chandeliers and stuff, but most of the stuff, we’re buying.”

Early on, the couple asked the show’s producers at multi-channel network DECA if they should table the concept until sponsors were on board, but “we decided that we wanted to make the content first so we had a proof of concept and also a voice that we could then take to brands,” Zehr says.

Albrecht and Zehr moved into the storybook-style L.A.-area house in December, and since the show debuted in January, they have churned out 10 episodes, covering everything from shopping junkyards for furnishings to rush remodeling the guest room in time for a visit by Zehr’s parents.

“Sometimes we’re stuck between a rock and a hard place because we’ve got to turn out an episode, but we don’t want to rush it and do something in our house half-assed,” Albrecht says.

Albrecht’s entire YouTube career is a happy accident. She originally signed up to YouTube just so she could upload videos to embed on her blog.

“I didn’t yet realize what a giant interactive community existed on YouTube,” she says.

As Albrecht’s YouTube career was taking off, Zehr’s band The Click Five was winding down. He was able to take the skills he picked up in the music world and apply them to her business. Zehr wasn’t just the drummer for the band, which broke up in 2013, he was also its web designer and the manager of its street promotion team. He learned how to work with 6-figure production budgets on music videos, and he also learned how to make do as the budgets declined along with the fortunes of the band and the record industry as a whole.

“One thing learned is to not rely on big machines and to develop a more grassroots thing where you have engaged fans,” says Zehr, who serves as COO of Mr. Kate. “At the end of the day, your strongest commodity, for lack of a better word, is your fan. You can do a lot with money, but money can also go away very quickly.”

To make sure that doesn’t happen, Albrecht and Zehr are diversifying their Mr. Kate portfolio. Like many of her YouTube brethren, Albrecht is working on a book, to be published by HarperCollins next year.

“It’s a way for me to curate information and projects I’ve been wanting to do in a careful and methodical way,” Albrecht says, “which is different than the way people traditionally produce YouTube content, which is on-the-fly, talking to the camera.” The content will be all-original, she notes, never before blogged or vlogged.

The couple is also constantly busy creating new concepts and content for the YouTube channel, her blog and various TV appearances, coordinating licensing deals, and coming up with new items for her 4-year-old line of jewelry for men and women.

“At some point, we’ll probably need to do an OMG! We’re Working to follow that process,” Zehr says.

If they wanted to, Albrecht and Zehr could easily apply the OMG template to a variety of life’s stages, from OMG! We’re Having a Baby all the way to OMG! I’m Arthritic, Incontinent and Senile.

“We could spin this off in all kinds of ways,” Albrecht agrees. “As long as the audience wants to see and experience the things we’re doing in our lives, we’ll be sharing it, I guess.”