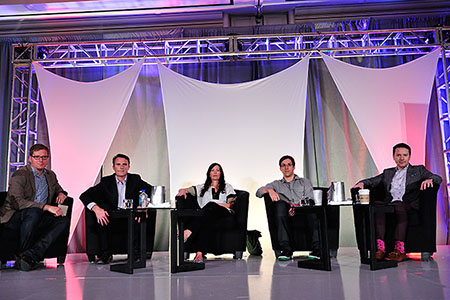 For every $1 CNE puts into programming, $1 goes to marketing: Exec

Realscreen West’s “Digital Dollars and Sense” panel on Wednesday revealed that the rise of unscripted content on digital outlets is signalling a greater focus on storytelling regardless of platform.

Panelists agreed that the previous demarcations between television and digital programming are dissolving in favor of an emphasis on the production of quality programming for an online space.

“Viewers don’t think, ‘I’m going to watch a digital show now,'” said Greenbaum, a digital producer whose Emmy-nominated sports mascot docuseries Behind the Mask airs on Hulu. “These terms don’t matter nearly as much as they used to. Now it’s about where they can watch the show.”

At Condé Nast Entertainment (CNE), the company’s digital video network and its editorial brand-inspired roster of original series also earned an Emmy nomination for its Casualties of the Gridiron docu-series. Klein says the nod is indicative of a shifting culture in which the constraints put on digital content are disappearing.

“It’s storytelling, doesn’t matter the platform,” said Klein. “When you loosen your handcuffs and break free of those 20- to 30-minute slots, it’s really freeing. Our content is editorially driven, but our sales sell exactly as they would do for the cable networks.”

Klein points out that for every dollar CNE puts into original programming, they put a dollar into marketing. This year, the company is set to produce 120 series.

Online series – which enable groups to easily measure their audiences – also act as incubators for other platforms.

“When you launch digital content, because the metrics are so rich around it, you can see if it can be something else entirely,” said moderator Greer.

Meanwhile, budgets are still markedly smaller for digital programming, but even that can be advantageous in certain situations.

“Budgets are a lot more efficient than they would be on our cable channels,” said Klein. “When it’s working, you can scale quickly, and when it’s not, you cut it off.”

“You have to be more creative in pre-production,” she said. “It’s about finding those passion players, and selling a project that works better as short-form content.”

For his part, Greenbaum looks on the positive side of tight budgets.

“The less money they give you, the more freedom you get,” he told the audience. “When we start writing, we realize that no networks will want that, but it helps us shift our focus.

“None of us got into this line because we wanted to get rich,” he added. “We wanted to tell stories.”