Creators behind Farmed and Dangerous discussed the monetization of the QSR branded Hulu series at a Stream Market panel on Tuesday.

Chipotle original series Farmed and Dangerous was so successful, the brand already has another web project in the works. 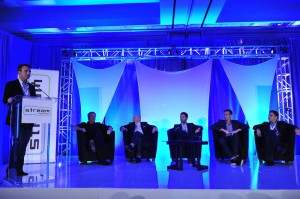 “We’re in development on another series-based show, a 22-minute format which lends itself to TV but probably won’t have TV as a distribution point,” said Mark Crumpacker, chief marketing and development officer at Chipotle Mexican Grill, during a panel session, titled “Branded Video: Inside the Deals,” at the Stream Market conference in Santa Monica on Tuesday.

The restaurant chain, which launched the half-hour comedy on Hulu earlier this year, is also thinking of establishing a content fund that would allow the brand to continue to invest in similar projects. One episode of Farmed and Dangerous — a unique example of branded entertainment that the company is able to derive a long-term benefit from — allowed the show to become the second-highest rated show on Hulu, Crumpacker said.

Most fast-food restaurant chains will introduce a new menu item every 30 or 45 days, then promote it through advertising. “It’s extraordinarily expensive. Chipotle has never subscribed to that model,” Crumpacker said, adding their healthy-choice items (organic tofu, anyone?) don’t lend themselves as well to traditional, high-turnover advertising.

The overarching goal of its branded content projects is to change the way people feel about food. An added benefit, however, is that Chipotle is also able to monetize that entertainment, for example, by selling the format overseas.

“Chipotle is getting paid to distribute that content in territories where they have restaurants,” said panelist Daniel Rosenberg, founding partner of Piro Entertainment, which co-produced the series with Chipotle. “They’re getting paid for their marketing essentially in those territories (such as the U.K. and Canada). I think that’s novel.”

One of Rosenberg’s favorite parts about Farmed and Dangerous is that Ben and Jerry’s paid to feature its products in the show.

“It may be the first time one brand bought ads inside of another’s branded entertainment,” said Rosenberg. “I’d like to see more of that.”