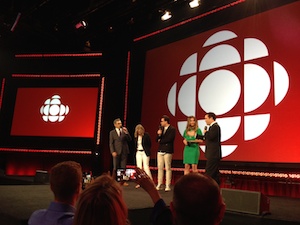 Canadian public broadcaster CBC is dipping its toe into the original web-streaming space with the soft-launch of a new online comedy portal called Punchline.

Officially unveiled at the broadcaster’s upfronts presentation Thursday, the comedy portal is still in beta phase, with an amalgam of made-for-web and adapted content featuring CBC comedic talent under the banner “Punchline Studio.” Currently, the site features content from the “22 Minutes Writers’ Room” (based on the pubcaster’s flagship mock-news series) and other web shorts based on broadcast properties, including a web spinoff of half-hour comedy Mr. D.

“It’s something we’ve been thinking about for a while,” explained Sally Catto, executive director, commissioned & scripted programming, CBC. “Canadian comedic talent are among the best in the world and there is so much new talent out there that we haven’t found yet. We really want to be a place Canadians come to experience and explore Canadian talent.”

Catto declined to go into specifics on the plan for the site ahead of its official launch on an undetermined date, but explained that the pubcaster wants to first experiment in the space before it settles on what formats will be featured. She did confirm, however, that user-generated content, stand up and original web shorts are all possibilities.

“We have some really cool initiatives that are going to attract some fantastic talent and creativity,” she said, adding that the goal is to feature a “curated” selection of content. “We want to keep the net broad and see what our audience responds to.”

The CBC is currently grappling with what to do next as it faces the dual challenges of federal budget cuts and declining ad revenue (following its loss of NHL hockey rights). When asked if digital would be a focus moving forward, as a way to incubate talent and develop lower-cost programming, Catto and unscripted colleague Jennifer Dettman would only affirm that the pubcaster is looking at content as platform-agnostic.

“One (platform) is not greater or more desirable than another. This is an expansion of our platform, a new way to showcase talent,” Dettman said.