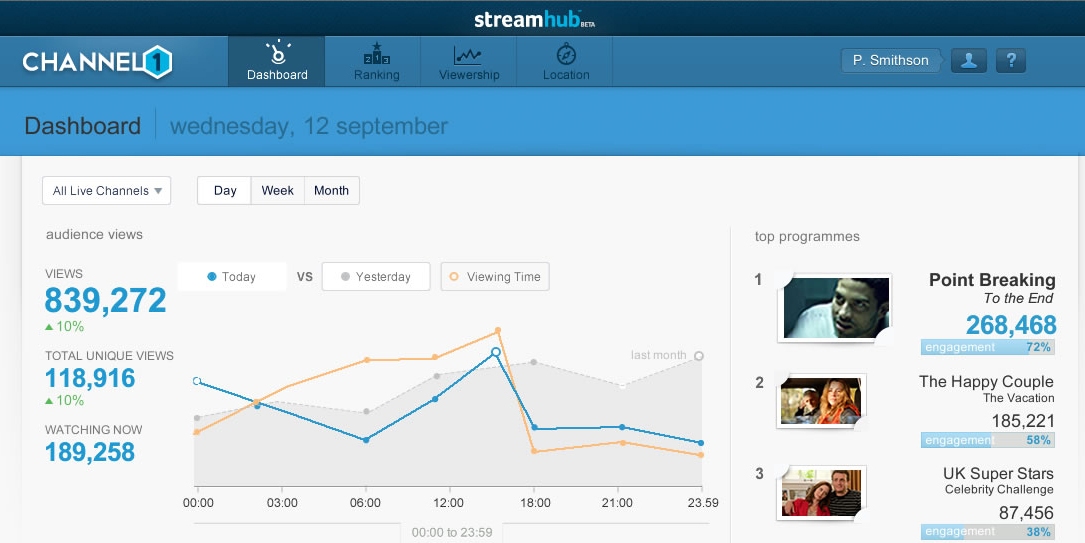 The London-based media technology company is also launching an experimental index to monitor the performance of TV programs on YouTube.

London-based media technology company Streamhub announced on Thursday that it has launched a real-time video analytics service for the media industry.

Now in beta, Streamhub takes a client’s video data from its own services and YouTube, along with social media metrics from places like Twitter and Facebook, and traffic metrics from Google Analytics to calculate key influencing factors affecting viewer engagement.

The company is led by Aki Tsuchiya, the former business development director at Joost, which was an internet TV service founded by Skype and Kazaa founders Janus Friis and Niklas Zennstrom that operated in the mid-2000s.

“[Streamhub] was something born out of a conversation with a content owner who was concerned about how competitors were performing in the online video space,” Tsuchiya said in a statement. “As we don’t have access to every broadcaster’s online video viewing data, YouTube’s sheer scale makes it imperative for companies to use this market data to both drive traffic to their official channels, as well as understand the impact of YouTube itself.”

Streamhub is also launching an experimental YouTube index that monitors the performance of TV programs on the video sharing site, allowing companies to compare the relative popularity of legitimate and illegal uploads.

“The Youtube Index will be available to the public within the next month,” Tsuchiya said. “In the meantime, access will be granted to selected beta users who will be providing feedback to mature the product for industry-wide use.”

Early prototypes of Streamhub received the 2013 Streaming Media European Readers’ Choice award for Best Analytics/Quality of Service Solution, and a special commendation at the MIPCube Lab 2013 event in Cannes, France.

Streamhub is a brand name of Five Cool Consulting Ltd. Founded by Tsuchiya and Nick Ten Cate in 2009, Five Cool has offices in London and Tokyo.