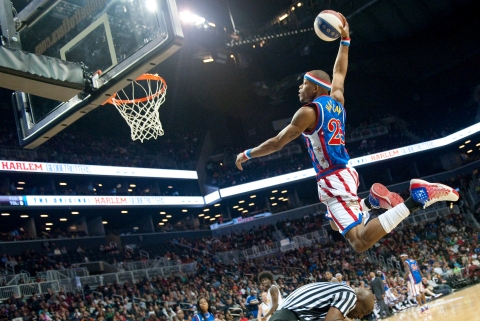 The Whistle goes for slam dunk with Harlem Globetrotters

On the heels of receiving a $10 million investment, the sports MCN announces it will manage and monetize the exhibition basketball team's YouTube channel.

Digital sports network The Whistle is going to manage and monetize Harlem Globetrotters’ YouTube channel as part of a partnership announced Wednesday.

The Whistle plans to distribute Globetrotters’ content beyond its own multichannel network — the team’s videos will appear on Xbox this summer, and its pro-league partners (which include the NFL, MLB and NASCAR) will highlight the content across their own platforms.

“The Globetrotters are a great mix of skill, speed, talent and humor that make them a perfect fit for digital media platforms in general, and The Whistle specifically,” said Brian Selander, spokesperson for The Whistle, in an email.

The Globetrotters have a YouTube audience that skews younger and male, but their family-friendly antics attract a wide demo. With the partnership, the team expects to see “more humor, more personality, more action — including collaborations with other Whistle channels,” said Brett Meister, SVP of communications, Harlem Globetrotters International.

“Our partners range from pro-leagues playing in stadiums to incredible amateur athletes filming impossible shots in their own backyard,” added Selander.