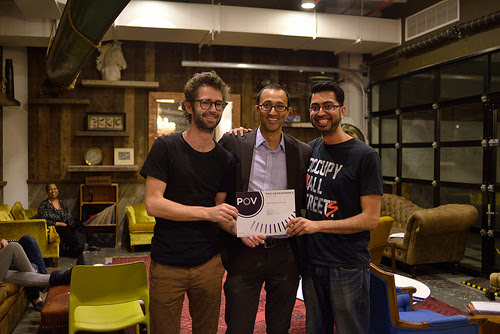 While cameras have yet to roll on Noriginals: The Art of Uncreativity, the still-in-development documentary has already picked up one award for its interactive component.

The interactive project, called #POETASTR, won the POV Hackathon 5 Participant’s Choice Award at the two-day hackathon held from May 10 to 11 in New York City at The Centre of Social Innovation.

“The documentary is a lot about how people are using technology to write, and this new movement in writing [that’s] more about writing a program to write a poem, than about writing a poem yourself,” he explains.

#POETASTR, an Algorithm-Generated Content (AGC) poetry creation tool, pulls random content from Twitter and then allows users to choose a lyrical structure in which to organize the information (such as a haiku or sonnet). It was programmed by coders Evan Misshula, Naqueeb Memon and Colin Rothfels. Rothfels is the resident technologist on the Noriginals project.

#POETASTR will be part of the interactive platform for Noriginal, which explores how technology is changing creativity. The doc is still in development, with Montreal-based La maison de prod (Vic+Flo Saw a Bear) producing alongside writer/director C.S. Roy and Stéphanie Morissette, with Dpt.co and Séditions/LESEDSED.

The upcoming interactive platform will be produced by La maison de prod and interactive agency Dpt.co.

Noriginals was also one of 64 projects selected to participate in the upcoming Sheffield Doc/Fest and MeetMarket. The filmmakers are currently seeking financing for the film and are hoping to find broadcast partners.