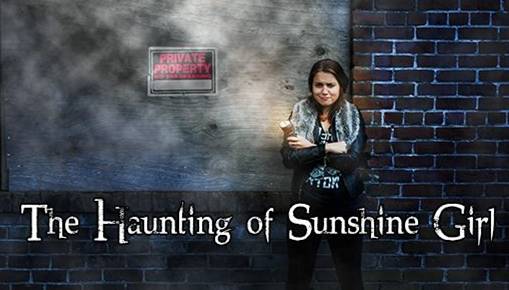 ‘Adorkable’ YouTuber scores a deal with the Weinstein Co.

Producer Mercedes Rose on how The Haunting of Sunshine Girl went from her daughter/star Paige McKenzie receiving marriage proposals to landing a deal with the company for a series of novels and movies.

Online fame is a strange thing. Paige McKenzie, star of the YouTube series The Haunting of Sunshine Girl, gets emails from obsessive fans around the globe — from a boy in Iceland with no electricity who watches her on a computer at the local library, to a man in Iran who sent a marriage proposal offering a dowry of 8 sheep. Yet she can walk around her hometown near Portland, Oregon, virtually unnoticed.

But that could be changing soon. On Thursday, the Weinstein Company announced that it had cut a deal to adapt Sunshine Girl for a series of young adult novels and films. It’s a pretty impressive feat for a show that shot its early episodes on a cheap consumer-grade flipcam.

“When our agent said, ‘The Weinsteins are interested,’ I said, ‘You do mean Harvey and Bob, right?” says Mercedes Rose, who created the show with director Nick Hagen and co-stars opposite McKenzie, her real-life daughter. “This is better than we could’ve dreamed.”

In 2013, McKenzie was one of finalists in Seventeen‘s Pretty Amazing contest. The coverage caught the eye of Mollie Glick, a New York-based literary agent with Foundry Media, who contacted the mother and daughter about turning the show into a young adult book series in late October 2013.

The show, which premiered in December 2010, tells the story of a 16-year-old who moves with her mother from Texas to Washington State to a home that she soon discovers to be haunted. It’s shot in McKenzie’s real home, using natural light and a lot of first-person camera work, often by McKenzie herself. Her younger sister plays the ghost.

“We kind of look at it as Gilmore Girls-meets-Paranormal Activity,” says Rose, whose acting credits include guest spots on Portland-based TV shows, such as Leverage and Portlandia, and voice work as Princess Rosalina in several popular Nintendo game titles, including Mario Kart Wii. “It’s about this really good kid who has this great relationship with her mom and doesn’t try to take her clothes off to get attention. She’s adorkable, and she chases ghosts, not boys.”

Sunshine Girl is a hit on YouTube, with more than 100,000 subscribers and an average of 5 million views a month. But it was a 70-year-old print magazine that set McKenzie on the path to what they hope will be movie and literary stardom.

In 2013, McKenzie was one of finalists in Seventeen‘s Pretty Amazing contest. The coverage caught the eye of Mollie Glick, a New York-based literary agent with Foundry Media, who contacted mother and daughter about turning the show into a young adult book series in late October 2013. When they went out with a proposal for publishers to bid on, it caught the attention of the Weinstein Company, which saw its potential as a multi-platform property.

“We didn’t even know they had a literary division,” laughs Rose.

Rose can’t guess what the budget will be for the Sunshine Girl feature, but it likely will be exponentially bigger than the YouTube version.

“It’s no budget,” says Rose of the web series. “A couple hundred dollars pays for many, many episodes. But we do try to pay all of our actors, because we come from an actor’s background. And it’s been my daughter’s full-time job since she was still in high school.”

More than 1,000 episodes of Sunshine Girl have been produced to date. The average instalment is from 3 to 5 minutes, with a cliffhanger at the end of every episode, but some have been as long as 15. To help feed YouTube’s insatiable hunger for content, they recently started adding stylistically simpatico content from outside creators to their channel.

There’s no word on when the feature version of Sunshine Girl might go into production or whether it will be released theatrically or direct-to-digital. But Rose and McKenzie are currently working on the first novel in the series with author Alyssa Sheinmel (The Beautiful Between), which is scheduled to be published by Weinstein Books in spring 2015.

“In the book, we’re planning to say she’s adopted, because we don’t look alike, even though she’s my real daughter,” Rose reveals.

There are many dark show business tales about young actors being brought into the biz by their parents who are then destroyed by sudden fame. But Rose is confident her daughter can handle whatever comes her way, including 8-sheep marriage proposals from the Middle East.

“She’s been kind of dealing with it slowly since we started, so I think she’s got a very good foundation to deal with all of that,” Rose says. “She kills at interviews. She’s so natural, and she loves the camera. I think she’ll be fine with what’s next and keep her head on straight.”