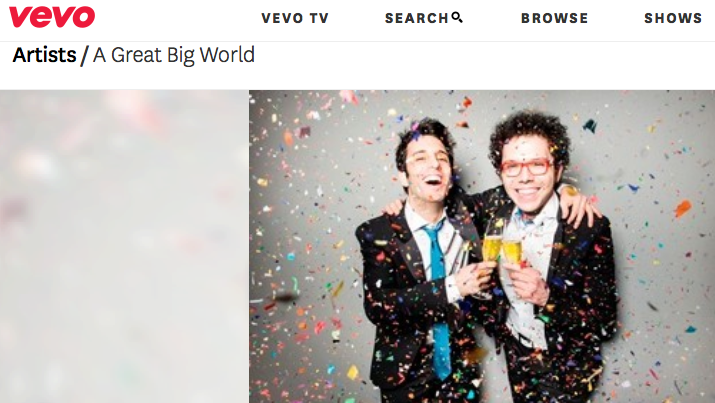 Vevo unveiled an ambitious 2014 slate at the Digital NewFronts on Monday that will expand its brand reach outside of the digital realm and into a world of live events.

The music video hosting service announced that it will be using its branding program called Certified, which celebrates music videos that have garnered 100 million views or more, to launch a fan convention and concert experience dubbed Certified Live to be held in Los Angeles this fall.

Vevo also announced a new slate of 7 original music-centric series, including co-productions with Milk Studios, MADE and Legs Media (a multi-media studio), Rachel Zoe’s website The Zoe Report, and Endemol.

Certified Live will bring together two of the biggest acts that have achieved Certified status with 3,000 of their fans, who will have the opportunity to walk the red carpet and go behind-the-scenes prior to the concert.

The artist line-up will be announced in the coming weeks. Acts with videos that have achieved Certified status include Katy Perry, Lady Gaga, Justin Bieber, Selena Gomez, Jennifer Lopez and Pitbull.

Vevo will post footage captured by fan cams, as well as an official on-demand concert. In total, it will release 80 original pieces of content from the event, including 10 songs from each performer.

Vevo also announced new partnerships with AT&T, which will sponsor a series of music video premieres, and leading native in-video advertising company Mirriad, which kicked off with the unveiling of a music video for Aloe Blacc’s “The Man,” featuring an integration of the Levi’s brand in the music video.

The 7 new original series announced by Vevo are:

The shows will join Vevo’s returning original series — Lift, GO Shows, Hot This Week, Certified, Lyric Lines, Tour Exposed and its live event platform, Vevo Presents. Additionally, Vevo will also continue its previously announced productions including the NUVOtvseries The Collective, Powered by Vevo, as well as its partnerships with CBS Interactive for Live on Letterman and American Express and YouTube for American Express Unstaged.

Vevo also announced an expansion of their Twitter Amplify partnership with Certified CountUps, a program in which videos will be embedded into targeted tweets from Vevo and brand marketers, as well as artists and fans, encouraging more views to drive videos to Certified status.

The presentation, which was made to 250 people at New York’s Stephan Weiss Studio, kicked off with A Great Big World (pictured in Vevo TV screengrab) performing “Say Something.” Currently at nearly 80 million views, the video of the song with Christina Aguilera is the first to be selected for Certified CountUps. Mary Lambert also performed.