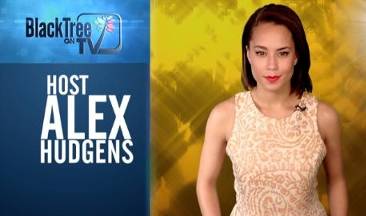 Multi-platform digital network BlackTree TV’s leap from the internet to cable with its entertainment news show BlackTree on TV, which premiered this week on the Soul of the South TV Network, is being touted as the first time that a black entertainment YouTube channel has launched a daily network TV program with national coverage.

But BlackTree TV founder Jamaal Finkley feels they were already playing a significant role in the world of entertainment news.

“Years ago, there was The Black Carpet on BET, but now there’s no one else focusing on African-American talent in front of and behind the camera,”  says Finkley, who shoots the show’s in-studio segments on a soundstage in Burbank, Ca.

Hosted by Alex Hudgens, the show draws on BlackTree TV’s library of interviews, behind the scenes stories and set visits from its digital programming, along with fresh reporting, to fill out a new half-hour program each weeknight.

Finkley says BlackTree TV has done well with view-based ad revenue on YouTube, but it faces challenges pursuing ad buys and sponsors outside that space.

“A lot of the African-American ad buys still go to old school magazines like Essence and Ebony, and on the TV side, they’re driven to BET,” Finkley says. “So it’s almost like a blind advertiser throwing money at four or five organizations that are pretty traditional.”

But there’s an upside to the complacency easy ad money engenders in the other media outlets.

Says Finkley: “They haven’t moved into new media as quickly, so we’ve found that we’ve become a great opportunity for a lot of the major ad-buy agencies like Burrell and Common Ground to move into this digital new media space with an outlet that has the sensibilities of the culture, as well as the respect and the access in the industry, to really deliver something.”

It could be argued that BlackTree TV has a broader reach in the virtual world. First conceived by Finkley in a dorm room more than a decade ago, it launched on YouTube in 2008 and went on to amass more than 136,000 subscribers and garner, according to company figures, more than half a billion views. Over the years, it’s also branched out on to other distribution platforms, including iTunes, TiVo, Sony DivX and Roku.