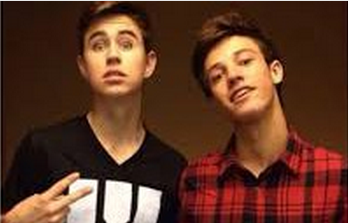 Social media personalities Nash Grier and Cameron Dallas (pictured) ink a deal and are banking that their social media tween appeal will help them become the poster boys for AwesomenessTV.

Now here’s the most awesomeness of awesome news: Vine favorites Nash Grier and Cameron Dallas haves been signed to the AwesomenessTV network.  The two personalities, who have close to 12 million followers on Vine between them, will also be making a movie with AwesomenessTV founder and CEO Brian Robbins.

AwesomenessTV will be the exclusive representatives for Grier and Dallas across all social media platform, aside from Vine, and for YouTube advertising.

Nash, 16, brings with him a Vine “audience” of 7.5 million and another 3.5 million on Twitter and Instagram. He will be focused on growing his YouTube channel for AwesomenessTV.

Dallas, 19, is no slouch in the followers department either, registering 4.1 million for Vine. He will be expanding his output on YouTube and working on adding more males to his tween and teen girl-rich fan base.

“Nash and Cam have really authentic voices and a strong connection with their audience, which is why we’re so excited they are going to be part of the AwesomenessTV family,” said Robbins in a statement.  “Making a movie is a natural next step for them. They already have a dedicated fan base.”

AwesomenessTV is a subsidiary of DreamWorks Animation. The multi-platform media teen-and-tween-friendly company is also home to the scripted and reality  programs IMO, Make Me Over, Austin Mahone Takeover, Mindless Takeover, Side Effects and Runaway, as well as the AwesomenessX channel and ATV Network. AwesomenessTV also produced and distributed the feature film Mindless Behavior: All Around the World .