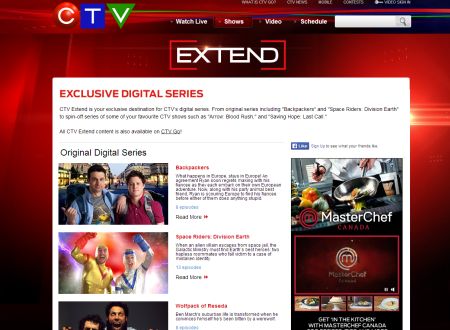 CTV Extend will be free to consumers and feature original content like Backpackers and Space Riders: Division Earth.

Bell Media’s CTV has announced the launch of CTV Extend, a new digital hub that is free for consumers and features original and acquired digital content.

The ad-supported hub features newly commissioned digital programs like Backpackers and Space Riders: Division Earth as well as acquisitions like Guidestones and extensions of other shows like Arrow: Blood Rush and Saving Hope: Last Call.

At launch the digital hub features more than 10 series and 120 episodes of programming. The media co has also commissioned Joke or Choke, a pilot ordered exclusively for CTV Extend from executive producer Howie Mandel as well as a second season of the Emmy Award-winning Guidestones from iThentic and 3’oclock.tv, according to a release.

Backpackers is an eight part series of 11-minute episodes that follow Ryan and Beth, a recently engaged couple who decide “what happens in Europe, stays in Europe” and agree they are free to act single on their separate backpacking trips prior to their nuptials. Ryan quickly realizes they’ve made a mistake and sets off in search of Beth without a clue where on the contintent his fiancé could be. Shot in location in Prague, Rome, the Italian Rivera and Paris, Backpackers is produced by Shaftesbury’s digital arm Smokebomb Entertainment.

Space Riders: Division Earth is a 13 part series of 6-minute episodes that follow two out-of-shape nobodies who accidentally become Earth’s heroes. The Power Rangers send up stars and is co-created by Mark Little and Dan Beirne, produced by iThentic in association with Bell Media.

CTV Extend will be piloting Joke or Choke, a 30-minute pilot for a stand-up comedy competition series created by Craig Brown starring Jonny Harris and Mark Forward wherein comedians must write and perform new material for a fickle judge. The show is produced by Insight and executive produced by Howie Mandel, John Brunton, Barbara Bowlby, and Mike Marks.

Also coming later this year is the second season of Guidestones, a award winning series that follows the story of journalism students who uncover a global conspiracy while investigating the unsolved murder of a scientist. Season Two is produced by iThentic/3′oclock.tv in association with Bell Media, IPF, OMDC and CMF with Catherine Tait and Jonas Diamond serving as executive producers.

This launch follows a move from  NBC earlier this month  when it announced it is commissioning more than a dozen digital original projects.

From Media In Canada, with files from Michael Kolberg