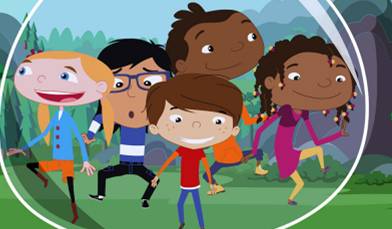 As people around the world marked Earth Day on Tuesday, PBS Kids took the opportunity to launch a new original online property titled Plum Landing, designed to teach 6- to 9-year-olds more about the planet they live on using a character from outer space.

The narrative of the story is provided by 30 animated videos on the Plum Landing website. The flash animation was done by Global Mechanic in Vancouver. The live action videos were shot by Bufflehead Productions.

The cross-platform accessible website also includes nine games of exploration, creativity and scientific discovery, and about 100 galleries of missions where children can create pictures and take photographs to send to Plum for possible publication.

Major funding for Plum Landing was provided by the National Science Foundation, the Corporation for Public Broadcasting and The Kendeda Fund. Additional funding is provided by the Northern Research Station, Forest Service and the U.S. Department of Agriculture.

To build awareness of the program, four of its animated videos are appearing as on-air shorts between episodes of Arthur this week on PBS Kids.

Plum Landing is produced by the Boston PBS station WGBH, which makes more than two thirds of the public television broadcaster’s nationally-distributed shows, including Nova, Frontline, Masterpiece, and American Experience.