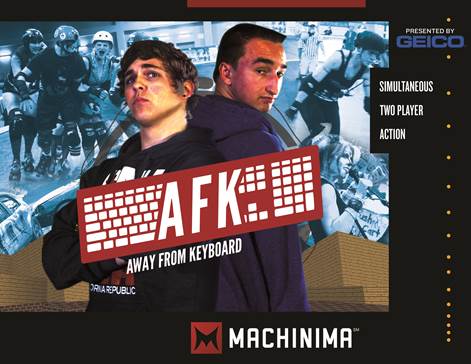 The MCN is producing three seasons of the Geico-sponsored show titled AFK (Away From Keyboard), which will have YouTube influencers competing in both virtual and real-world challenges.

Multichannel network Machinima has teamed with auto insurance company Geico to create an Amazing Race-style online series for the video game crowd. It’s called AFK (Away From Keyboard), and it launched its three-episode first season on Monday. As of Tuesday morning, the first episode had close to 59,000 views.

Machinima is producing three seasons of the show, hosted by Bruce Green (host and producer of Machinima’s daily gaming news show Inside Gaming), each of which will have two YouTube influencers battling against each other in a cross-country grudge match featuring both real-world and gaming challenges. Every season will culminate with a scavenger hunt from the show floor of a major gaming or fanboy event, featuring participation from attendees.

Season one pits top Minecraft players Jerome Aceti (a.k.a Jerome ASF) and Jason Probst (a.k.a. MinecraftUniverse) against each other in events ranging from a Grand Theft Auto V flash-gaming challenge to a real-life dangerous demolition derby in Dallas. It will climax with a competition on the show floor of PAX East in Boston.