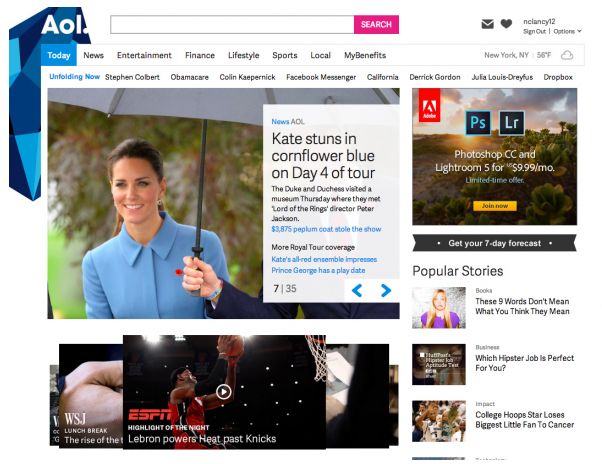 Video will be featured more prominently on the AOL homepage and premiere throughout the day, with a similar strategy coming soon to Canada.

AOL.com has moved its videos to its homepage and announced a new programming strategy, two weeks ahead of its upcoming digital newfront presentation for original programming.

Videos from partners such as Conde Nast Entertainment and ESPN will now premiere throughout the day on the homepage, because AOL reports that 63% of all viewing occurs during the daytime programming window. Most videos were previously housed on AOL On network vertical.

A spokesperson for AOL Canada says a similar move is being considered for AOL.ca, to give video a spotlight placement on its homepage. The Canadian arm of the company has also unveiled plans to host its own newfront following the U.S. one in New York City.

Visitors to AOL.com watched over 158 million videos in March, according to an AOL release.

Last week AOL announced it was renewing four of its AOL Originals from the previous year, with City.ballet., Hardwired, The Future Starts Here and #CandidlyNicole all getting the green light for a second season. It also ordered a new show starring Steve Buscemi and its first half-hour series, Connected.